The mother-son duo can be seen smiling for the camera in the photos. 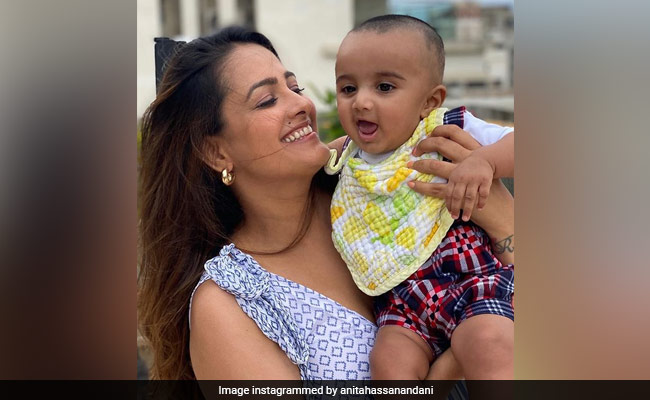 If you are looking to start your Sunday on a happy note, we recommend that you head straight to Anita Hassanandani's Instagram timeline. The actress, who turned mother a few months ago, has been spending quality time with her son Aaravv Reddy. Thanks to her strong social media game, her fans have been able to be a part of her special moments with the little one. Now, adding to the list of lovely images and videos, Anita has posted pictures with her son and we have to say that the mother-son duo is cuteness personified. Dressed in a lovely dress, Anita is glowing in the pictures. Aaravv, on the other, is setting some serious toddler fashion goals in a checkered jumpsuit and bib to match.

In the first picture, Anita can be seen holding Aaravv in her arms as the two smile for the camera. In the second, the doting mother cannot take her eyes off the little one. Given how cute he looks, we, too, couldn't help gushing over him.

Anita let the photos do all the taking by limiting the caption to just a heart-eye emoji. Given how adorable the pictures are, we are not surprised that Anita's fans and colleagues chose to flood the comment section with heartening messages.  On top of the pile is the reaction from Anita's husband, entrepreneur Rohit Reddy who replied to the images with the comment, "My jaans."

Take a look at the images here.

If you have fallen in love with the mother-son duo, here are a few other photos that you do not want to miss.

Previously, Anita had shared another video in which she is seen humming with Aaravv, who joins in by cooing along. The caption to the video reads, "New singer in town." Adorable, isn't it?

Anita Hassanandani tied the knot with Rohit Reddy in October 2013. The couple welcomed their first child on February 9, this year. Anita is best known for her work in television shows such as Kkavyanjali, Yeh Hai Mohabbatein, Kabhii Sautan Kabhii Sahelii and Naagin, among others.

"New Beginning" For The Kapil Sharma Show: See Which "Old Faces" Are Returning