Amitabh Bachchan's Next Project is With Emraan Hashmi. Details Here 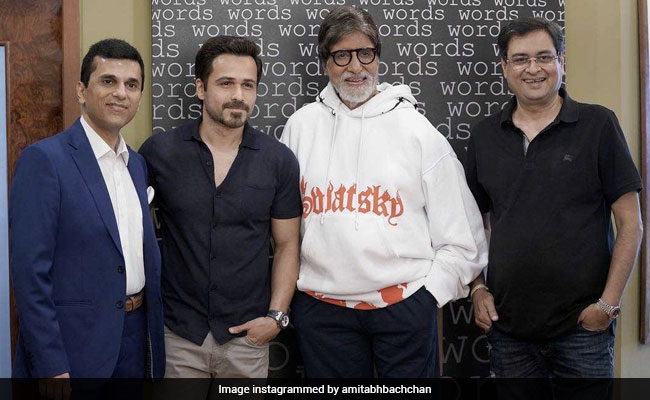 Amitabh Bachchan and Emraan Hashmi will be seen sharing screen space for the first time in Rumi Jaffery's untitled film. On Thursday, Mr Bachchan announced his association with the project by sharing a picture of himself along with his co-star and film's directors and producers and wrote: "A long standing commitment.. Finally fulfilled in being a part of Anand Pandit's next production, starring Emraan Hashmi and directed by Rumi Jaffery." In his post, Big B also revealed that the film will be releasing on February 21 next year.

Emraan Khan too shared the same picture on his Instagram profile and he added the caption: "Super Excited to share screen space with Amitabh Bachchan sir in Anand Pandit's next production venture, directed by Rumi Jaffery! Releasing on February 21, 2020.

A long standing commitment .. finally fulfilled in being a part of @anandpandit's next production, starring @therealemraan and directed by #RumiJaffery. Releasing on 21st Feb 2020. @anandpanditmotionpictures #APMP

The untitled film will reportedly be a thriller and it will be written and directed by Rumi Jaffery, who has directed films like Gali Gali Chor Hai and Life Partner among others. He also directed the 2008 film God Tussi Great Ho, starring Salman Khan and Priyanka Chopra, in which Amitabh Bachchan played the role of God.

Emraan Hashmi was last seen in Soumik Sen's Why Cheat India, in which he co-starred with Shreya Dhanwanthary and Snighadeep Chatterjee. Emraan Hashmi will next be seen in the murder-mystery Murder 4.