Amitabh Bachchan's Moving Tribute To Rishi Kapoor. Here's A Clip From 102 Not Out 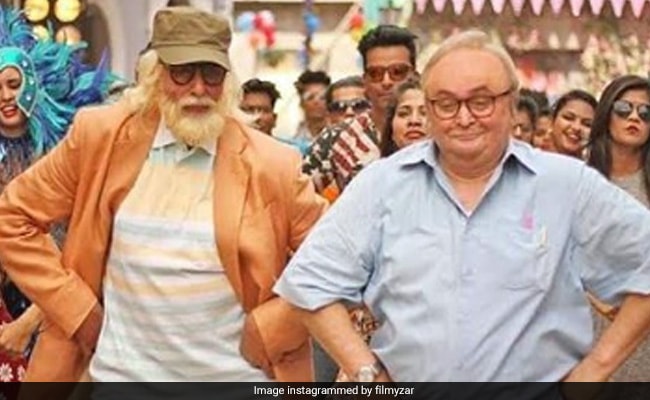 Amitabh Bachchan and Rishi Kapoor in a still from 102 Not Out. (courtesy filmyzar)

In a moving tribute to Rishi Kapoor, Amitabh Bchchan shared a lyrical video clip from the last film where they worked together - 102 Not Out. In the film, Rishi Kapoor and Big B recreated the evergreen song Waqt Ne Kiya Kya Haseen Sitam from the 1959 film Kaagaz Ke Phool. Sharing the lyrical video of the song which was sung by Big B in the film 102 Not Out, the 77-year-old actor wrote the lyrics of the song as a tribute to his friend and co-star Rishi Kapoor. "Waqt.. Waqt ne kiya kya haseen sitam .. Tum rahe na tum, hum rahe na hum," wrote Big B. See his post here:

Rishi Kapoor died on Thursday after a two-year-long battle with cancer. Amitabh Bachchan, wrote a moving eulogy post for Rishi Kapoor on his blog on Thursday. "During his time of diagnosis and his treatment he never ever lamented his condition. It was always, 'see you soon, just a routine visit to the hospital, I'll be back shortly'. Joie de vivre, the exuberant enjoyment of life, was a gene he inherited from his father, the Legend, the Ultimate Showman, the Iconic Raj Kapoor. I never visited him in hospital, I never wanted to see distress on his smiling cherubic face. But I am certain, when he went, he must have gone with a gentle smile," read an excerpt from his post.

Rishi Kapoor was diagnosed with cancer in 2018 after which he underwent treatment in New York for 11 months. He returned to India in September last year. He got admitted to the hospital twice in February this year.

Rishi Kapoor is survived by his wife Neetu, son Ranbir, daughter Riddhima and other members of the vast Kapoor clan.