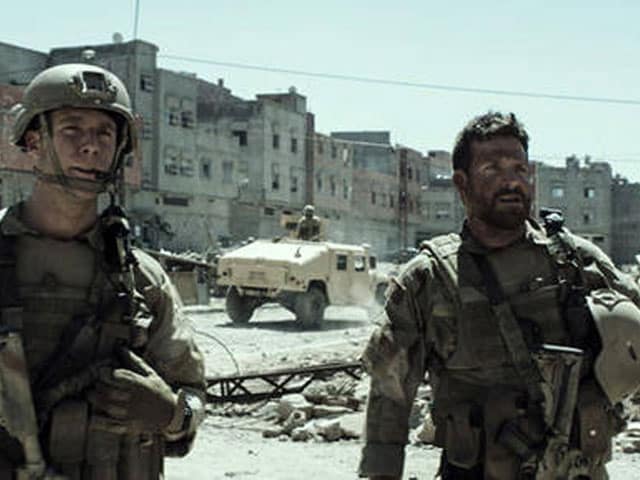 A still from American Sniper

Clint Eastwood's hit film American Sniper has reignited a bitter debate about the USA invasion of Iraq and one of its most famous warriors, with conservatives hailing the movie as a long overdue tribute to veterans.

Critics on the left have slammed the popular film as an attempt to whitewash the history of the American occupation of Iraq and say the subject of the movie, former Navy SEAL Chris Kyle, deserves no hero treatment for his handiwork as a deadly sniper.

Directed by Mr Eastwood and starring Bradley Cooper, the film has broken box office records and is based on Kyle's best-selling memoir, in which he expressed no regrets for the lives he extinguished as a sharpshooter in the war.

The right-leaning National Review called the film a "cultural moment."

"The movie gives America something it's lacked since the start of the war - a war hero on a truly national, cultural scale," David French wrote.

The film has been nominated for six Oscars, including for best film and best actor. And both Clint Eastwood and Bradley Cooper insist their movie is not meant to deliver any political message.

Bradley Cooper said that "for me, and for Clint, this movie was always a character study about what the plight is for a soldier."

But a war of words has erupted over the movie and its protagonist, exposing polarized views of the country's wars since 9/11.

Filmmaker Michael Moore created a firestorm when he appeared to dismiss the movie, tweeting snipers were "cowards."

"My uncle killed by sniper in WW2. We were taught snipers were cowards. Will shoot u in the back. Snipers aren't heroes," he wrote.

Actor Seth Rogen, whose recent movie The Interview provoked fury from North Korea and a cyber attack on Sony Pictures, said American Sniper reminded him of the Nazi propaganda movie that appears at the end of Quentin Tarantino's Inglourious Basterds.

"God bless our troops, especially our snipers," she wrote.

Moore and other critics of the film were not "fit to shine Chris Kyle's combat boots."

Newt Gingrich, the former Republican speaker of the House of Representatives, wrote that Moore should spend a few weeks with ISIS and Boko Haram."

Former soldiers have tended to give it high marks, and some veterans groups helped organize special early screenings of the movie for veterans.

But at least one USA Marine who fought in Iraq ten years ago was not impressed.

"It presents a very sanitized picture of what the occupation of Iraq was like and the nature of the Iraqi resistance," he told AFP.

He said Iraqis are given no voice in the film, and there is no attempt to explain why they may have resented foreign troops on their soil.

Instead of the black-and-white picture painted in the film, he said the war looked "extremely gray" to him at the time.

"I stopped believing in good guys and bad guys because of my experience in Iraq," Caputi said.

In his memoir, Kyle -- a Texan and former professional rodeo rider -- expressed only pride about his war record and his targeting of what he called "savages."

He is believed to have taken out 255 people with his rifle, and the Pentagon officially credited Kyle with 160 confirmed kills -- making him the deadliest sniper in American military history.

Kyle was killed on February 2, 2013 by a former US soldier suffering from post-traumatic stress, who is due to be tried next month.

Paul Rieckhoff, an Iraq war veteran and head of the Iraq Afghanistan Veterans of America, said the movie reflected how many soldiers thought about the war.

"Kyle, much like many I served with, and our president himself during most of the Iraq War, held a very black-and-white view of the conflict. We were right, they were wrong," Rieckhoff wrote in Variety.

Promoted
Listen to the latest songs, only on JioSaavn.com
The movie does not attempt to address the political "complexity" of the conflict, he said, but it may help civilians grasp the risks and anxieties faced by the small number of Americans who volunteer for military service, he said.

The movie will "haunt" civilians who see it. "For a long time," he wrote. "And force more questions than answers. Just like the war has for us."