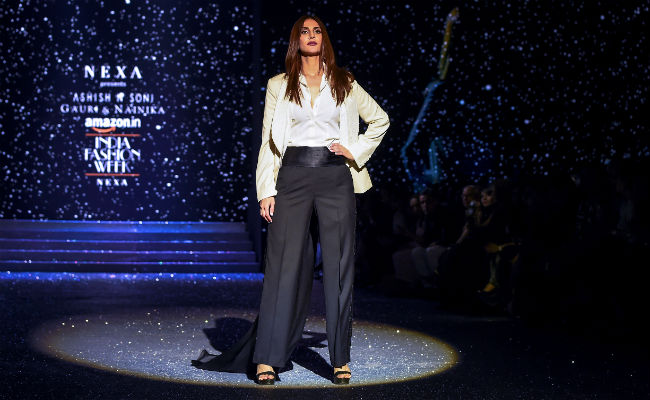 New Delhi: Vaani Kapoor walked the ramp at the Amazon India Fashion Week on Wednesday, which was also her 'Bond girl' moment. That's because, Vaani walked the ramp as the title songs of James Bond films Skyfall (2012) and Golden Eye (1995) (in addition to the signature 007 theme music) played in the background. Vaani was the showstopper for designer duo Gauri and Nainika's collaboration collection with Ashish N Soni. Vaani opened the show in a spotless white sheer outfit with ruffled bodice by Gauri and Nainika and then changed into Ashish Soni's slit trousers paired with a swanky blazer. The Befikre actress shared a BTS photo with both sets of designers from the event and captioned it: "Belle of the ball or Bond girl?"

Belle of the ball or Bond girl ? Opened the show for @gauriandnainika and closed it for @nashishsoni at the first ever presentation of #aifwaw18

Of why they picked music from James Bond films, Ashish Soni told IANS: "There was a lot of sophistication, like Bond." Vaani Kapoor was also impressed. She told IANS: "It's an honour to be walking for such brilliant designers. And I get to keep this creation."