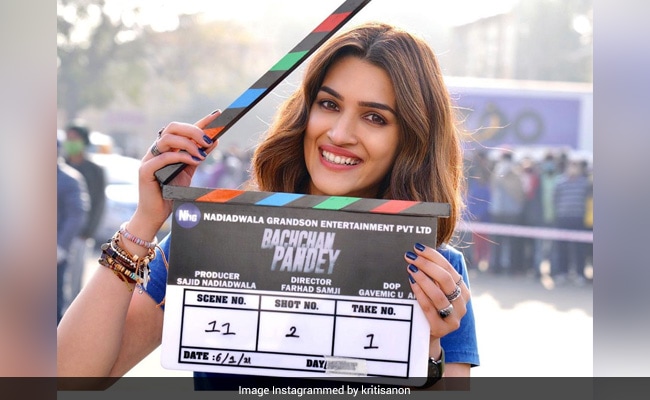 Kriti Sanon kick-started filming Bachchan Pandey, which will also star Akshay Kumar in the lead role, in Jaisalmer on Wednesday. The film, directed by Farhad Samji and produced by Sajid Nadiadwala, will also feature Pankaj Tripathi, Jacqueline Fernandez, Prateik Babbar and Arshad Warsi. Sharing a couple of photos of herself from the sets of the film, Kriti Sanon wrote: "1st day of 1st film shoot in 2021! With the production that gave me my very 1st film! #BachchanPandey here we go." For those who don't know, Kriti Sanon made her debut in Bollywood with Sajid Nadiadwala-produced 2014 film Heropanti. The photos also feature Farhad Samji, who directed Akshay Kumar and Kriti Sanon in Housefull 4, and Sajid Nadiadwala's wife Warda.

Team Bachchan Pandey will reportedly wrap the shooting of the film by March.

Bachchan Pandey is scheduled to be released this year.

Akshay Kumar also has Prithviraj and Bell Bottom lined up. He completed the shooting of Bell Bottom last year.