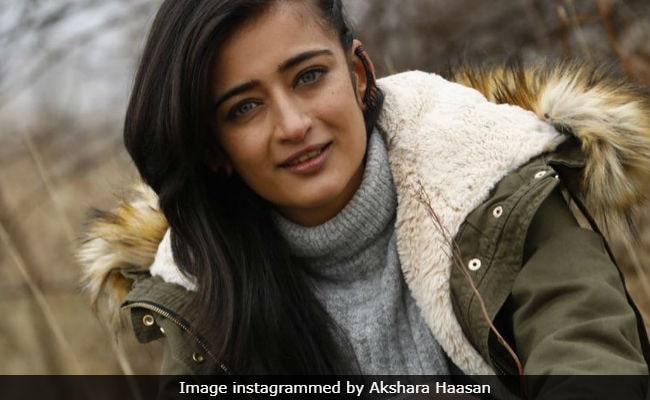 Akshara Haasan on the sets of Vivegam. (Image courtesy: Instagram)

Actor Tanuj Virwani's spokesperson on Friday issued a statement saying that the actor was not involved in the online leak of private pictures of actress Akshara Haasan, reports Indian Express. Tanuj Virwani, son of actress Rati Agnihotri, dated Akshara, daughter of actor Kamal Haasan, for a few years. A Mumbai Mirror report stated that Akshara had shared some private images with Tanuj when they were dating, because of which he could be called in for questioning. Tanuj's spokesperson told the Indian Express: "Tanuj is absolutely aware of what Akshara must be going through. We are more than happy to cooperate with the police or with any kind of investigation, so as the culprit gets punished and gets caught. Tanuj is going to give it his all and whatever is needed of him."

The spokesperson also added that Tanuj and Akshara mutually ended their relationship and that they remain good friends. "They are still friends. If Akshara ever had anything of this sort in mind to accuse Tanuj, then I am sure she would not have been talking to him for so many months, almost years after the break-up."

Earlier, a police officer told Mumbai Mirror: "Akshara was using an iPhone 6 till 2013, which had the photos. Prima facie investigation has revealed the photos were shared with Tanuj in 2013. He may be summoned for questioning."

Earlier this month, some private pictures of Akshara Haasan hit the Internet, after which the actress filed an FIR in the Versova police station. She simultaneously shared this statement on social media: "Recently, some of my private pictures were leaked on the Internet. Who did this, or why, is not known to me yet. But what I do know is it is deeply unfortunate to make a young girl the victim of such an act only for a pervert mind's enjoyment. And each time someone shares it with eye-catching headlines to draw more traction, it scars me deeper and adds to everyone's participation in my harassment and helplessness."

Akshara is the younger of Kamal Haasan and his ex-wife Sarika's two daughters. Her elder sister Shruti is also an actress. Akshara has featured in Hindi films like Shamitabh and Laali Ki Shaadi Mein Laaddoo Deewana, and Kadaram Kondan in Tamil.

Tanuj Virwani debuted in Bollywood in 2013 film Luv U Soniyo and he was last seen in web-series Inside Edge.