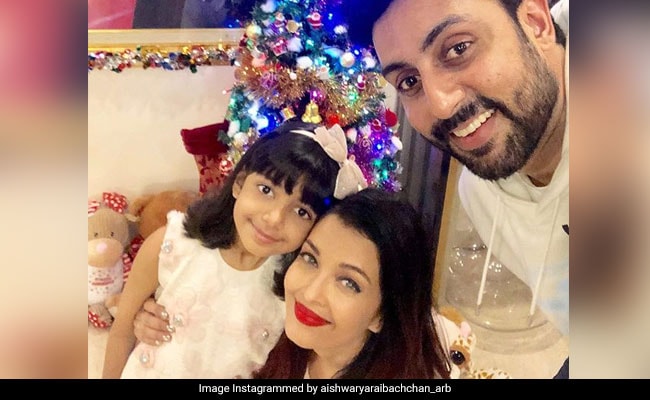 Aishwarya Rai Bachchan sent Christmas wishes to her fans with family photos on Instagram on Wednesday. The 45-year-old actress posted photos of herself with daughter Aaradhya and Abhishek Bachchan and wrote: "Christmas love to all." The pictures also feature a portrait of Aishwarya's late father Krishnaraj Rai in the backdrop. Aishwarya might have been slightly late in wishing her fans on social media but there is no denying the fact that the post is absolutely adorable. The Bachchans were colour coordinated in white. Aiswarya's Instagram post has close to one lakh likes in less than two hours. "My faves," Deepika Padukone commented on the picture.

Aishwarya and Abhishek got married in April 2007 and Aaradhya was born in November 2011.

Christmas Love to All

A post shared by AishwaryaRaiBachchan (@aishwaryaraibachchan_arb) on Dec 26, 2018 at 2:59am PST

Ahead of Christmas, Aishwarya Rai Bachchan spent a part of her Sunday with cancer survivors at an event in Mumbai. Sharing a set of photos from the event, Aishwarya wrote: "Christmas, cheer, love, blessings and saluting all the angelic brave hearts at CPAA God bless all their families, doctors, caregivers and loved ones. I'm so overwhelmed by your strength of spirit, positivity and ever-smiling darling pure souls. God bless and love always."

A post shared by AishwaryaRaiBachchan (@aishwaryaraibachchan_arb) on Dec 23, 2018 at 6:58am PST