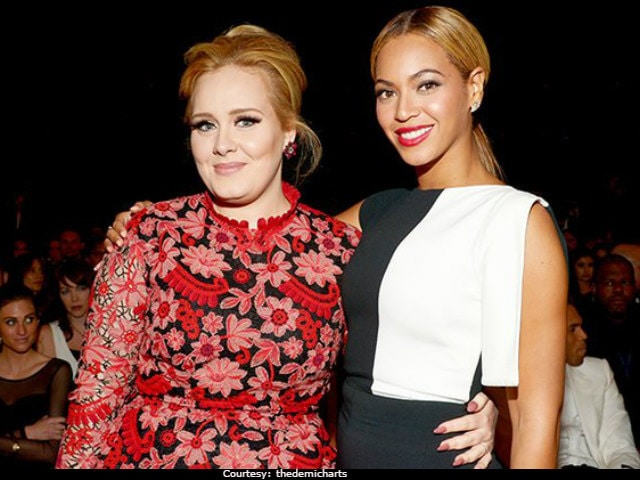 Adele and Beyonce recently attended the Grammys together (courtesy: thedemicharts)

New Delhi: Grammys 2017 Album Of The Year winner Adele is all set to collaborate with fellow singer Beyonce for a song on women empowerment, reported Radar Online. A source informed Radar Online that the 25-year old singer has always been a huge fan of the Formation singer from childhood. "Adele is a huge Beyonce fan, and it was her idea to team up together. This is going to be a girl power anthem," a source told Radar Online. This will possibly be the biggest duet as both the singers have always been fan-favorites. "These two getting together will set the music business on fire," Radar Online quoted the source as saying.

The source also said that the collaboration will be a big hit, reported Radar Online. "They're still talking about what they want to do. But this is going to be one of the biggest duets of all time. These two getting together will set the music business on fire," the source told Radar Online.

Promoted
Listen to the latest songs, only on JioSaavn.com
The Rolling In The Deep singer was also seen expressing her immense love and respect for the 35-year-old singer during her acceptance speech at the Grammys after she won Album Of The Year Grammy. Notably, Adele left behind Beyonce, who was nominated for the same category for her recent album Lemonade. In her emotional speech, Adele claimed that the award should have belonged to Beyonce as her nominated album was so well-thought, inspiring and monumental. "I can't possibly accept this award. And I'm very humbled and I'm very grateful and gracious. But my artist of my life is Beyonce. And this album to me, the Lemonade album, is just so monumental. Beyonce, it's so monumental," Adele said.

Meanwhile, Beyonce won two Grammy Awards this year and also made her baby bump debut at the awards gala.