Several of her Instagram followers also reminded her that stepping out during the cyclone was not a great idea: "Don't promote these types of videos, it was not good to be outside." 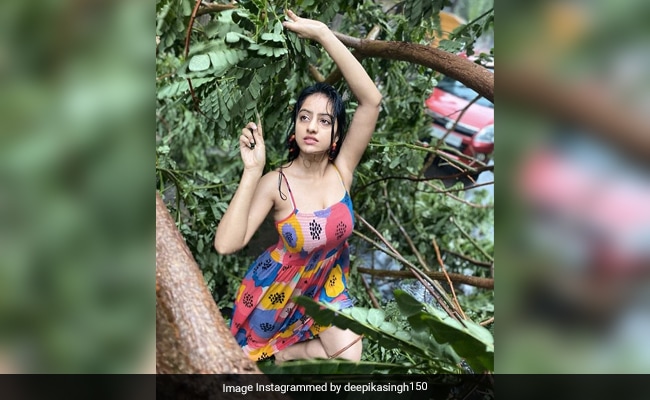 Actress Deepika Singh recently filled up her Instagram with glimpses of a photoshoot she had as something to remember Cyclone Tauktae by - her words. In one of her posts, Deepika Singh wrote that while clearing the road in front of her house, her husband Rohit Raj Goyal clicked a few photos of her with this perspective in mind: "You can't calm the storm, so stop trying. What you can do is calm yourself, embrace the nature and it's gloomy moods because the storm will pass." The Diya Aur Baati Hum actress also shared a video on Instagram, in which she can be seen dancing in the rain, with the uprooted tree in the backdrop. Her posts prompted a barrage of comments, which were critical of her posts for appearing to be insensitive.

One user reminded her of her privilege and wrote: "Tumhare ghar ki chat sahi salamat hai isiliye... (Because your house is still intact, that's why)" while another user commented: "People are dying in cyclone but people like you are enjoying this. What a shame." Several of her Instagram followers also reminded her that stepping out during the cyclone was not a great idea: "Don't promote these types of videos, it was not good to be outside."

Cyclone Tauktae passed through Mumbai on Monday, triggering strong winds with the highest-ever speed of 114 kilometres per hour. The cyclonic storm also brought the highest ever rainfall in Mumbai in May, leading to massive water logging across the city and road blocks because of fallen trees. Flight operations at Mumbai's Chhatrapati Shivaji Maharaj International Airport was suspended from morning till 10 pm on Monday because of Cyclone Tauktae. The cyclonic storm had made landfall in Gujarat at around 8.30 pm on Monday, packing winds with speeds of 155-165 kilometres per hour, gusting to 190 km/hour, after which the cyclone passed through Maharashtra.

In May 2014, Deepika Singh got married to Rohit Raj Goyal, the director of Diya Aur Baati Hum, and the couple welcomed their first child, son Soham in May 2017. Deepika Singh has also starred in shows such as Yeh Rishta Kya Kehlata Hai, Tu Sooraj, Main Saanjh Piyaji and played the female lead in Kavach... Maha Shivratri.