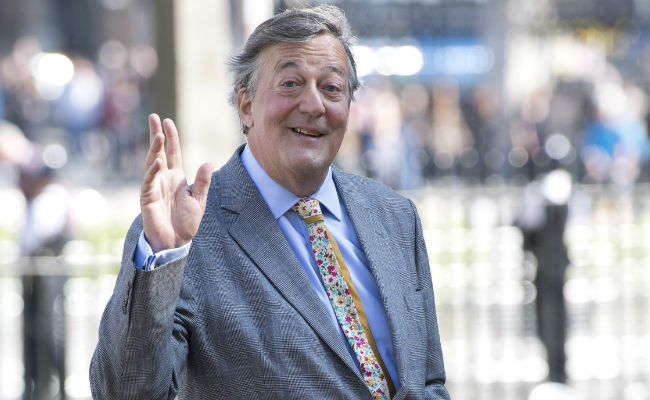 Stephen Fry at an event in London. (Image courtesy AFP)

London: British actor and comedian Stephen Fry revealed on Friday he has been battling prostate cancer, adding that he was currently "fit and well." The 60-year-old wrote on Twitter that over the last two months he had "been in the throes of a rather unwelcome and unexpected adventure." "I'm sorry I haven't felt able to talk about it (until) now, but here I am explaining what has been going on," he said, posting a link to a video message on his personal website.

Mr Fry said he underwent surgery to remove part of his prostate and lymph nodes in January, and "it all seemed to go pretty well."

"As far as we know it's all been got," he said, adding: "For the moment I'm fit and well and happy."

Mr Fry, who hosted last year's BAFTA film awards and pulled out of presenting this month's ceremony for the first time in years, described the cancer as an "aggressive little bugger."

He revealed it was discovered after visiting his doctor for a routine flu jab before Christmas.

Mr Fry, who was nominated for a Golden Globe for playing gay writer Oscar Wilde in the 1997 movie Wilde, said he had been staying out of the public eye as he continued to recover.

"I've been keeping my head down as much as possible because you want to get better without strangers sending you cards and letters because you have to reply to them all," he added.

Promoted
Listen to the latest songs, only on JioSaavn.com
Mr Fry first made his name acting in cult British television shows Blackadder and Jeeves and Wooster, and has starred in more than two dozen films, as well as performing on stage, writing books and directing.

(This story has not been edited by NDTV staff and is auto-generated from a syndicated feed.)
Comments
stephen frystephen fry prostate cancerstephen fry health updates