Actor Rajesh Khattar And Vandana Sajnani Bring Baby Boy Home, Say 'This Has Been Anything But Smooth'

Revealing Vandana had a difficult pregnancy, Rajesh Khattar added that the baby was born three-months premature, who they brought home on Janmashtami 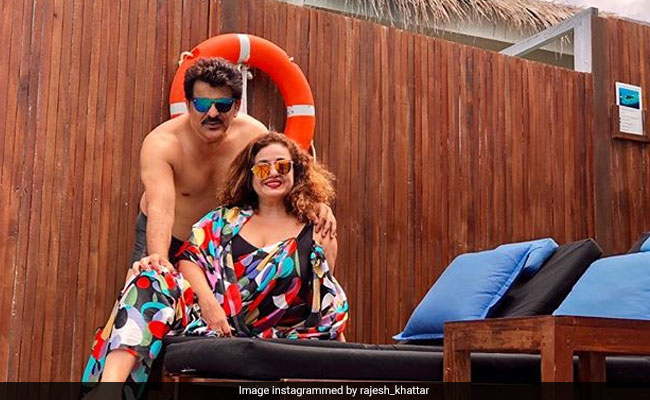 Actor Rajesh Khattar, best known for starring in television soaps such as Beyhadh and Bepannaah, recently confirmed that he and his wife Vandana Sajnani are now parents to a baby boy, who they have named Vanraj Krishna, in an interview to Bombay Times. Revealing that Vandana had a difficult pregnancy, Rajesh Khattar added that the baby was born three-months premature, who they brought home on Janmashtami. "It's a great feeling, but this journey has been anything but smooth. Many months ago, we were ecstatic when the doctor revealed that Vandana was carrying twins, but during her third month, she was diagnosed with a condition and had to be hospitalised. A few months later, it came to light that the growth of one of our babies was very slow and finally, we lost him," BT quoted him as saying.

#Thankyou all for all the #Positivevibes #Love and #Blessings for our little Krishna #VanrajKrishnaKhattar .. #Babyboy #Baby #Bundleofjoy #Miraclebaby #Vanraj @bombaytimes @thetimesofindia

A post shared by Vandana Sajnani Khattar (@vandanasajnaniofficial) on Aug 31, 2019 at 12:48am PDT

Talking about their ordeal, Rajesh Khattar said not only the baby but also Vandana battled medical complications during child-birth: "The situation was such that we needed to go in for immediate delivery to save the other baby. Thus, our son was born three months before he was due. Vandana's surgery did not go smoothly and she took a long time to heal; also, our baby was put in NICU (Newborn Intensive Care Unit) and was there for two-and-a-half months. The mother and son struggled throughout the journey, and finally, our little Krishna arrived home on Janmashtami. This is the most beautiful gift bestowed on us by the gods."

A post shared by Vandana Sajnani Khattar (@vandanasajnaniofficial) on Jun 26, 2019 at 8:52pm PDT

Talking to the publication, the 52-year-old father said he did not want age to come in the way of celebrating parenthood all over again: "For me, becoming a father at 50-plus was another challenge, but then, I am neither the first one, nor the last in this category. Of course, age is always a concern, as babies need energetic parents, but seeing Vandana struggle over the years to have a baby, I didn't want to come in her way."

A post shared by Vandana Sajnani Khattar (@vandanasajnaniofficial) on Aug 11, 2019 at 1:05am PDT

Rajesh Khattar revealed, since their wedding, Vandana Sajnani struggled for 11 years and adopted several methods in an attempt to have a baby: "After a lot of hardships - three miscarriages, three IUI (Intrauterine Insemination) failures, three IVF (In Vitro Fertilisation) failures and three surrogacy failures - over the last 11 years, we have reached here. I can't express my joy. I want to tell my story because it will inspire couples to keep the faith and not give up hope, whatever their age."

Vandana Sajnani is a theatre artiste and TV actress. Rajesh Khattar has featured in films such as Don, Don 2, Race 2 and Action Jackson