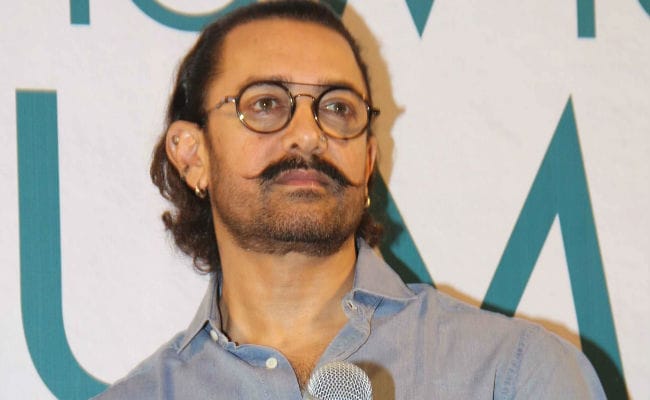 Aamir Khan at an event in Mumbai

New Delhi: Aamir Khan's ambitious adaptation of the Mahabharata has galvanised trolls into action, in turning prompting writer Javed Akhtar to get involved. Aamir's magnum opus, which might be made in several parts, has been making headlines recently after reports that the film (or films) could be co-produced by industrialist Mukesh Ambani. Aamir's Mahabharata is very much in the planning-ideating stage as of now and almost no details - except that the 53-year-old actor considers it his 'dream' project and the budget is allegedly a whopping Rs 1,000 crore - are available. Equally unclear is what role Aamir Khan intends to play in the film (or series) - speculation says Krishna or Karna. And this has not gone down well with certain sections of Twitter because, wait for it, Aamir is Muslim.

It began with a tweet from a troll (who appears to be a Frenchman living in India) two days ago which read: "Why should Aamir Khan, a Muslim, play in most ancient and sacred of Hindu epics, the Mahabharata? Would Muslims allow a Hindu to play life of Mohamed?" The tweet also asked if Prime Minister Narendra Modi's government was going to "be like the Congress and just stand by in the name of secularism."

Javed Akhtar was incensed by the post and lashed out in the comments thread, asking "I would like to know which foreign agency is paying you to spread this kind of perverse and poisonous thoughts in our country...You obviously you know nothing about our Indian traditions and culture."

You scoundrel, have you not seen peter brooks production of this great epic Mahabharsta in France . I would like to know which foreign agency is paying you to spread this kind of perverse and poisonous thoughts in our country

You ignorant unfortunate imbecile, obviously you know nothing about our Indian traditions and culture . Do you know who were Ras khan bullay shah Waris shah, ,Baba Farid Nazeer Akbarabadi , Nizir Banarasi , Bismillah khan . You are just a frog in the stinking well of communalism

Pressed by another troll on the 'would Muslims allow a Hindu to play Mohammed' question, Javed Akhtar responded:

If know them they won't allow even a Muslim . Have you decided to emulate them .

Javed Akhtar wasn't the only person to defend Aamir in the comments thread, something the original troll complained about later and said that the Hindus disagreeing with him ought to be ashamed:

When I objected to @aamir_khan playing Lord Krishna in Mahabharata,I was trolled mostly by Hindus. Shame to a people, who lose pride in their spirituality & ready t abandon it to a religion who repeatedly massacred their temples, men, women and children. Shame on you Hindus !

There were plenty other unsavoury comments attacking not just Aamir but also Mukesh Ambani for reportedly financing the film. Aamir's 2014 film PK, which satirized religion, was invoked as well as his controversial comments on 'intolerance' some years ago.

However, some tweets were more concerned with who was going to be cast in the film. Hrithik Roshan or no one for Arjun, said one.

If Aamir Khan @aamir_khan wont cast Hrithik Roshan as Arjuna in his Mahabharata then there is no point making Mahabharata. just scrap it already coz noone can play Arjuna better than @iHrithik . Period

Earlier this year, it was reported that Aamir Khan had backed out of a biopic of astronaut Rakesh Sharma to focus on a project which would take several years to hit the screens. At that time, it was suggested that Aamir Khan is adapting Mahabharata under his production banner.

Just to be clear, there are no confirmed details about Aamir's adaptation - we don't even know for certain that he is making a version of the Mahabharata. If he does, it might well be the third such. The first is an adaptation of Randamoozham, which chronicles the events of the Mahabharata from Bheem's perspective. Mohanlal has been finalised to play the lead role. The second project has reportedly been proposed by Baahubali director SS Rajamouli. Last year, Aamir Khan had said that he would like to collaborate with Rajamouli if he adapted Mahabharata on the big screen. "I'm a huge fan of Rajamouli's work and if he ever plans to make Mahabharata, I'd love to play Krishna or Karna. I might actually go with Krishna," he told PTI.

Incidentally, Rajamouli also announced his next project with Jr NTR and Ram Charan Teja in lead roles on Thursday. It's not the Mahabharata.