"It's been a month. Now, your phone calls will not come anymore," Mukesh Chhabra remembered Sushant Singh Rajput 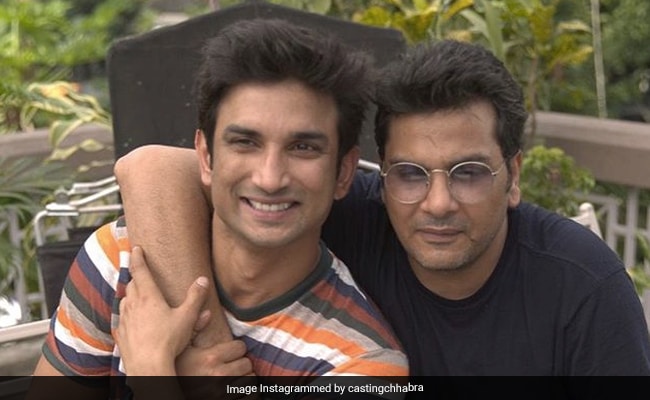 Sushant with Mukesh Chhabra in a throwback (courtesy castingchhabra)

Sushant Singh Rajput's friend and colleague Mukesh Chhabra, who directed the actor in Dil Bechara, grieved the late actor in a post on Tuesday, which marks exactly one month since Sushant died. Sharing a bunch of fond memories from the sets of Dil Bechara, Mukesh Chhabra dedicated this emotional note to Sushant: "Ek mahina ho gaya hai aaj, aab toh kabhi phone bhi nahi ayega tera (It's been a month. Now, your phone calls will not come anymore." Upcoming film Dil Bechara is Mukesh Chhabra's directorial debut and will remain Sushant's last film. The director had earlier said that Sushant made a promise to him and kept it - "He had promised me that he would be in my first film." Sushant Singh Rajput was found dead at his Mumbai residence on June 14. The police, who are carrying out an investigation, say he died by suicide. Sushant was 34. Mukesh Chhabra was one of the handful celebrities who attended Sushant Singh Rajput's funeral.

Sushant Singh Rajput, who was known for his sprightly and jovial persona, is often remembered in fond memories by his Dil Bechara co-stars. Over the weekend, actress Swastika Mukherjee, who also stars in Mukesh Chhabra's film, shared a throwback video of dancing with Sushant. In her post, Swastika said her days of knowing Sushant will always be special:

HE danced with #kizie and then HE danced with me :-) . . I'd like to remember Sushant like this. Always. Simple. Fun loving. Jovial. Keep dancing with the stars, boy. Love. Thank you, Mukesh @castingchhabra for capturing this beautiful moment. I will cherish this forever. . . #dilbechara #behindthescenes #momentstocherish #joyfultimes #aftershoot #sushantsinghrajput #shineon

Sanjana Sanghi, who plays Sushant's love interest in Dil Bechara, often pours her heart out on Instagram talking about her late co-star.

Oye? I need to laugh till my stomach hurts at all your bad jokes. I need to compete with you on who can eat more ham & cheese omelettes and drink more chai. Fight with you over who's script looks more tattered and worn out because we worked on it endlessly. Try to keep up with your electric pace every time you said, "Chal na, thoda dance karte hain!" in the middle of a tough scene. And argue with you over what we feel about Yuval Noah Harrari & Freud's books. UGH.

Dil Bechara is an onscreen adaptation of John Green's book The Fault In Out Stars and will always remain special for fans of Sushant Singh Rajput as it marks his last project. The trailer of the film released earlier went crazy viral, garnering emotional responses from the actor's fans. Dil Bechara will premiere on Disney+Hotstar on July 24.