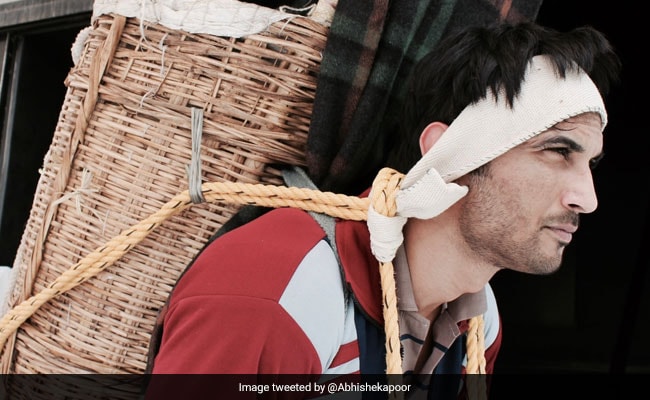 Sushant Singh Rajput in a still from Kedarnath. (courtesy Abhishekapoor )

Kedarnath director Abhishek Kapoor remembered the 2018 film's star and late actor  Sushant Singh Rajput on Monday afternoon. As the film clocked 2 years, Abhishek Kapoor posted a chunk of memories that were the closest to his heart. One such memory was that of the character Mansoor, played by Sushant Singh Rajput. Abhishek Kapoor recalled the time he introduced Mansoor's character to Sushant, after which the actor kept writing something on his hand. When Abhishek asked him what he was scribbling, Sushant Singh Rajput said, "Apni duniya samet raha hun (I am capturing the world). Sushant's understanding of the character Mansoor was more than what just meets the eye. Some of the points noted on the actor's hands were death, conflicts, religious aspects and that "life doesn't differentiate."

Sharing the picture on Twitter, Abhishek Kapoor wrote: "I remember while I narrated the story and we discussed Mansoor, he was writing something on his hand... I asked him, 'yeh kya likh raha hai haath pe'... He said, apni duniya samet raha hoon. #2yearsofkedarnath #2YearsOfSSRAsMansoor #sushantsinghrajput #kedarnath."

I remember while i narrated the story and we discussed #mansoor, He was writing something on his hand.. i asked him, yeh kya likh raha hai haath pe.. he said apni duniya samet raha hoon #2yearsofkedarnath#2YearsOfSSRAsMansoor#sushantsinghrajput#kedarnathpic.twitter.com/i3xwLRC3gh

Kedarnath showcased the love story of a Muslim porter (played by Sushant) and a Hindu pilgrim (played by Sara Ali Khan), set against the backdrop of 2013 Kedarnath floods. Sushant Singh Rajput's debut film Kai Po Che! was also directed by Abhishek Kapoor and it was based on Chetan Bhagat's novel The 3 Mistakes of My Life. The film also featured Rajkummar Rao and Amit Sadh. Sushant Singh Rajput died in June this year.