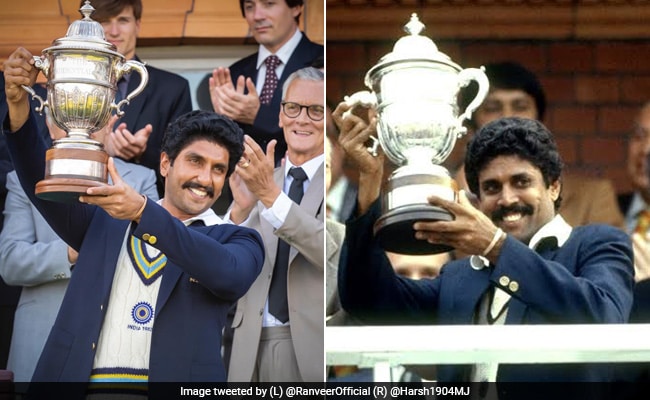 Ranveer Singh treated his fans to a refreshingly new still from his upcoming movie '83. Ranveer, who has been cast as Kapil Dev in the sports movie, features in a recreation of an iconic moment from the 1983 World Cup. Ranveer can be seen lifting the World Cup trophy, just like Kapil Dev held the trophy high after India's historic win against West Indies. Ranveer's photo did all the talking and hence, he simply captioned it: "This is '83." Meanwhile, cricket and Bollywood fans got quite a bit emotional on Twitter and ended up digging out old photos of Kapil Dev accepting the World Cup trophy. Without further ado, here's how Ranveer Singh refreshed memories of an entire nation chanting "India... India..." at the 1983 World Cup.

Twitter is besides itself with joy! "Spectacular! "What an iconic moment this is, Baba...83 is going to be a milestone in your career," wrote an excited fan while another added: "This man can do anything, can play any role." Ranveer's Gully Boy co-star Siddhant Chaturvedi also tweeted:

Spectacular! what an iconic moment this is baba...83 is going to be a milestone in your career... pic.twitter.com/khJMgHxPN3

This man can do anything, can play any role ..

Kapil Dev led the Indian cricket team to their maiden World Cup triumph on June 25, 1983. The BCCI celebrated the day last year with just a glimpse of "Memories to last a lifetime."

On this day in 1983 - India won the World Cup and held the trophy high at Lord's - Memories to last a lifetime pic.twitter.com/w6b7gg7zAw

The cast of '83 is headlined by Ranveer Singh, who features as Kapil Dev. Deepika Padukone has a cameo as Kapil Dev's wife Romi Bhatia in '83. The film also stars Tahir Raj Bhasin as Sunil Gavaskar, Saqib Saleem as Mohinder Amarnath, Ammy Virk as Balwinder Sandhu and Jiiva as Krishnamachari Srikkanth.

Directed by Kabir Khan, '83 is all set to hit screens on April 10 this year.