200: Halla Ho Review - Drawing strength from a slew of quietly efficient performances, the director parlays the material into an impactful tale of crime and punishment that transcends genre limitations. 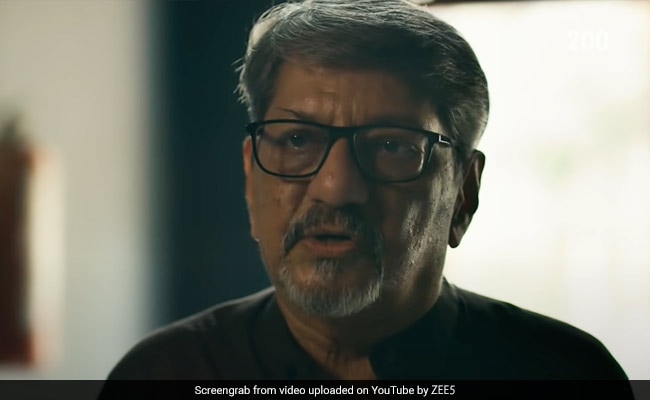 A loose re-enactment of a real-life incident that shook the city of Nagpur some 15 years ago, 200: Halla Ho, directed and co-written by Sarthak Dasgupta (The Great Indian Butterfly, Music Teacher), addresses the subject of caste oppression/systemic violence with an effective, pointed combination of anger and acuity.

Drawing strength from a slew of quietly efficient, unwaveringly precise performances by Amol Palekar, Sushma Deshpande, Rinku Rajguru, Barun Sobti, Saloni Batra and others, the director parlays the material into an impactful tale of crime and punishment that transcends genre limitations.

A bustee of inhumanly treated Dalit women decide on the spur of the moment to dispense mob justice to an upper-caste criminal who rapes and kills with impunity. The police turn a blind eye to his misdeeds. The women, pushed to the wall, take the law in their own hands.

Parts of 200: Halla Ho may seem a touch uneven, but the film is never unsure of the line it wants to take as it probes the workings of the police and the law as they deal with an unprecedented situation in which identifying the assaulters and framing specific charges against them proves to be a steep mountain to climb.

But the very police force that has no qualms about giving a serial rapist a long rope pushes for a quick conviction of the Dalit women of Raahi Nagar bustee, five of whom are rounded up and sought to be made an example of.

The film opens with the defining act of defiance by the downtrodden and defiled - 200 women, armed with knives and chilli powder and with their faces covered with their scarves and dupattas, barge into a district court and lynch an undertrial. The policemen who protected the criminal for a decade are caught unawares. They run for cover.

The questions triggered by the brutal assault form the narrative bulwark of the film. 200: Halla Ho, a Zee5 original movie, hinges on two Dalit characters - a highly respected retired judge who is scornful of caste labels and a young woman who has worked her way out of the Dalit bustee but is never allowed to forget where she has come from.

As the police proceed post-haste to have the five Raahi Nagar women, including the ageing but spirited Tarabai Kamble (Sushma Deshpande), convicted for the killing of Balli Chaudhary (Sahil Khattar), a conflict rages between the balanced approach favoured by Justice Vitthal Dangde (Amol Palekar) and the more impatient one adopted by a young woman, Usha Surve (Rinku Rajguru), who believes enough is enough.

The judge has power, privilege and punditry and, not all that surprisingly, no patience for anybody who brings up his caste identity; the young woman, on the other hand, still has one foot planted in the neglected bustee that she grew up in. She cannot shrug off the indignities that her people are constantly subjected to.

Justice Dangde learns that Balli had 73 wounds on his body and that his fingers, ears and genitals were chopped of. It wasn't a murder but an execution, he says. We need to find out, he adds, why the women would have resorted to such horrific violence.

The retired judge is placed at the helm of a fact-finding committee that includes journalist Poorva Sawhney (Saloni Batra), advocate Anwar Sheikh (Pradhuman Singh Mall) and mathematics professor and civil rights activist Avinash Avsare (Ishtiyak Khan). All four are sympathetic towards the women, but the legal luminary presiding over them is overcautious for obvious reasons. "Dalit hona kisiki morality ka certificate nahin ho sakta," he asserts.

Usha Surve, the woman whose return to the bustee marks the beginning of the end of Balli Chaudhary's reign of terror, has an ally in Brahmin lawyer Umesh Joshi (Barun Sobti). Not only does he extend free legal services to the arrested Dalit women, he also nurtures the hope of marrying Usha despite the latter's reservations over the caste chasm that separates them.

Caste violence in 200: Halla Ho isn't confined to Balli's depredations alone although his atrocities on the Raahi Nagar women are its worst manifestation. The police and the law are the arms and legs of a power structure that not only lets caste discrimination go unchecked, but thrives on perpetuating it.

Babasaheb Ambedkar's bust is visible on the left edge of the frame when the cops from the Vijay Nagar police station led by senior inspector Surest Patil (Upendra Limaye) reach Raahi Nagar to browbeat the women there into confessing that they lynched Balli in broad daylight.

Ironically, an Ambedkar portrait is prominently displayed on a wall in the police station, as also, not so ironically, in the courtroom where the five women are put on trial. And in the well-appointed home of Justice Dangde, Ambedkar is omnipresent although the upright judge is reluctant to let that influence his take on the law. He isn't happy to be called "a celebrated Dalit judge".

It isn't as if Justice Dangde doesn't know that the Dalits are poor, powerless and prone to being denied justice. When the reality hits him hard in the context of the Raahi Nagar women, he puts his doubts behind him and plunges headlong into a fight against gender and caste tyranny.

The best thing about 200: Halla Ho is that it is acutely aware of the solemnity of its theme. It does not, therefore, take recourse to any celebratory excess or masculine rage (as recent Tamil films such as Asuran, Karnan or Sarpatta Parambarai have done). Neither does it give in to the upper-caste saviour syndrome (as, say, in Article 15).

It is the tormented Dalit women themselves who stand up against the horrors perpetrated by the politician-policeman-criminal nexus. The film makes it a point to convey that their battle against injustice isn't a one-off pitched battle - it is a drawn-out conflict that isn't ending anytime soon.

With a seasoned actor like Amol Palekar (back on the screen after a long break) headlining the cast, restraint is built into the film as a key storytelling tool. Rinku Rajguru and Saloni Batra, too, are in their elements although one cannot help feeling the latter's role could have done a little more fleshing out. Sushma Deshpande's performance also stands out.

The writing contributes to keeping a tight rein on the film's tonal emphasis even as it articulates disgust and fury at the social distortions and legal loopholes that allow the most heinous violations of human rights in the name of caste supremacy.

200: Halla Ho is an important film and not just because it takes the caste question head-on. It stays true to its purpose, leaving no room for any dilution of its pertinent theme.