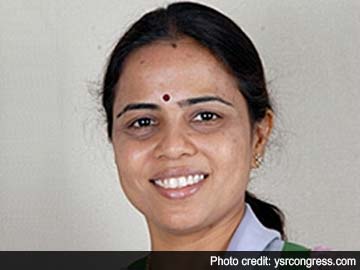 Ms Nagireddy, 45, was critically injured after the car in which she was returning after campaigning last night swerved and overturned. She was sitting in the front seat and was thrown out of the car.

She died in a hospital in Hyderabad today of severe head injuries.

Ms Nagireddy was contesting from the Allagadda assembly seat in the Kurnool district of Andhra Pradesh, from where she had been elected four times. A mother of three children, she joined politics in 1996. She had been in Chandrababu Naidu's TDP and Chiranjeevi's Praja Rajyam Party earlier.

YSR Congress president Jaganmohan Reddy, his mother Vijayamma and sister Sharmila have all suspended their campaign to come to Hyderabad to be with her family.

Andhra Pradesh will hold simultaneous polls to the state assembly and the Lok Sabha on May 7.
Comments
Shobha NagireddyYSR Congress