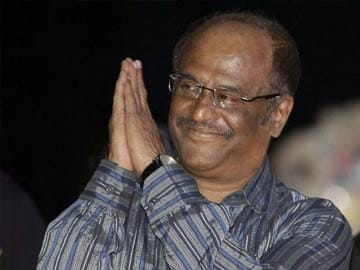 Later in the day, Mr Modi is scheduled to address an election rally in Chennai. (Narendra Modi: the tea seller who could be PM)

The buzz is that Mr Modi could seek the actor's endorsement for the Lok Sabha polls.

In the past, political endorsements by Mr Rajinikanth has fetched both superhit as well as flop results. (Elections schedule)

In 1996, Mr Rajinikanth's statement in public -- "Even God can't save Tamil Nadu if you vote for Jayalalithaa" -- worked wonders for the DMK-Tamil Maanila Congress combine. The alliance swept the state polls and Ms Jayalalithaa's AIADMK lost both the assembly and Lok Sabha polls.

Two years, later though the superstar expressed his support for the BJP, the DMK-BJP alliance could win only a modest 9 of the 39 seats in Tamil Nadu.

In 2004, Mr Rajinikanth's words had literally no impact when he asked his fans to vote against the Pattali Makkal Katchi after the party allegedly created trouble for his film Baba. The party ended up winning all the Lok Sabha seats it contested.

In 2011, on assembly election day, television cameras captured Mr Rajinikanth pressing the button against the AIADMK'a election symbol on the electronic voting machine; he claimed his fingers had "accidentally hovered for cameras".

The DMK lost in the assembly polls and the actor's daughters personally greeted Ms Jayalalithaa on her victory.

Though the actor has taken an apolitical stand over the last ten years, a senior BJP leader told NDTV, "Even if Mr Rajinikanth doesn't publicly endorse BJP, the meeting itself would turn out to be a support statement for the party which is trying to gain a foothold in the state".
This will be Mr Modi's second election campaign in Chennai for parliamentary polls.

Opinion polls have projected that the BJP will not fare well in Tamil Nadu.

Over the next week, top BJP leaders including Mr Modi, LK Advani and Rajnath Singh have scheduled a blitzkrieg of sorts in Tamil Nadu in a bid to better the party's prospects.

Promoted
Listen to the latest songs, only on JioSaavn.com
Though Ms Jayalalithaa has not entered into any pre-poll alliance in the state, she has so far refrained from criticising the BJP during her campaign. (J Jayalalithaa: the Poes Garden resident eyes a national role)

She has also toned down her prime ministerial ambition and her focus is now largely on becoming part of the Union government after the elections.

PM Modi's Attack Against Opposition On Pulwama Continues For Day 2