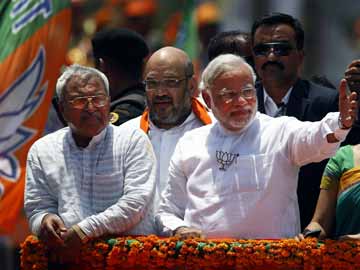 Amit Shah (C) with Narendra Modi at roadshow in Varanasi

New Delhi: Narendra Modi's close aide Amit Shah said on Thursday that the 'Modi wave has become a tsunami'. It instantly sparked a debate, with the Congress pointing out, a tsunami means destruction.

Mr Modi's spectacular roadshow in Varanasi has the BJP boasting about massive support for its prime ministerial candidate, and not just in the ancient city from where he is running for Parliament. Hundreds of thousands of people, some dancing and, beating drums, lined up for a glimpse as the 63-year-old waved from an open truck on his way to filing his nomination.

"After today, the Modi wave has become a tsunami," said Mr Shah, who accompanied Mr Modi. "Because of this, the Samajwadi Party, BSP and the Congress will definitely be wiped out in Uttar Pradesh. We will also benefit in Bihar and other neighbouring states. In days to come, from what we can gauge from the atmosphere in this country, it is clear - Ab ki baar, Modi Sarkaar (this time, a Modi government)."

The Congress soon had a rejoinder.

"This is an ominous statement. A tsunami brings devastation, death, destruction and grief. Is Amit Shah trying to tell the country that in a democracy, tsunami will come, wiping away what we have nurtured what we have consolidated as a constitutional democracy?" said union minister Anand Sharma.

Promoted
Listen to the latest songs, only on JioSaavn.com
Amid the political carping, the word 'tsunami' became a trending topic on social media.

The Congress has dismissed the BJP's claims of a Modi wave in the country, with Prime Minister Manmohan Singh calling it a "creation of the media." Uttar Pradesh Chief Minister Akhilesh Yadav agreed. "I have seen no Modi wave," he said after casting his vote.