Tension Between BJP, Shiv Sena Over Who Will Be Maharashtra Chief Minister 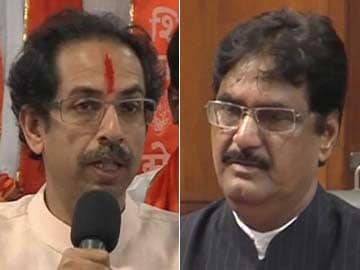 Mumbai: While the BJP and Shiv Sena have found themselves taking contradictory positions over the invite to Pakistan Prime Minister Nawaz Sharif, another issue could cause tension between the two allies - the choice of the chief ministerial candidate for the upcoming Maharashtra elections.

With Shiv Sena workers putting up posters in Mumbai which say "Dilli mein Modi sarkar, Mumbai mein Uddhav sarkar", many wondered if this was a signal that a Thackeray would take up an official post for the first time. "We are trying to have a legitimate goal. And if we dream of our leader becoming Chief Minister, it is not wrong. And Maharashtra wants what we want. Maharashtra would be happy if the new CM would be Uddhav Thackeray. And naturally we wouldn't have total support from all the parties and we are sure we are in the process this will happen," senior Shiv Sena leader Subhash Desai told NDTV.

This could upset the BJP's plans of projecting senior OBC leader Gopinath Munde as the chief ministerial candidate which is why he may not get a cabinet berth at the Centre. The BJP has already announced that Mr Munde will lead the party in the state elections.

Promoted
Listen to the latest songs, only on JioSaavn.com
The BJP-Shiv Sena combine won 42 out of the state's 48 Lok Sabha seats, decimating the Congress-NCP alliance which could only win six seats. In 2009, the Congress-NCP alliance had cornered 25 seats. The Congress, which had won 17 seats in the state five years ago, took a severe knock, and saw its tally dip to a mere two. Its ally, NCP, fared only marginally better, winning four seats in the state.