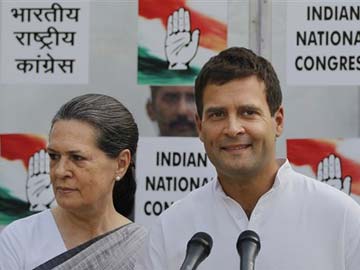 New Delhi: Congress president Sonia Gandhi and her son Rahul Gandhi may offer to resign, sources say, a day after they both accepted responsibility for the party's worst performance ever in the national election.

According to Congress party sources, they are likely to make the offer at a meeting on Monday of the Congress Working Committee, the party's top decision-making body, in a move that will largely be symbolic as party leaders are unlikely to accept it.

Sources say emotional speeches will set the tone for deep introspection on the Congress' spectacular rout. India's oldest party was reduced to double digits in Parliament and failed to win a single seat in 10 states, as a long and grueling campaign by Rahul Gandhi failed to stop the tide of public anger. (Narendra Modi wins India)

Yesterday, both leaders made brief statements to the media after their party's debacle.

"Congress has done pretty badly, a lot for us to think about. As vice-president, I hold myself responsible," said Mr Gandhi. (India Decides 2014: Full Coverage)

Sonia Gandhi spoke in Hindi and said, "The people's verdict is against us... As Congress president I take responsibility for the defeat." She congratulated the BJP on its massive win.

Narendra Modi's BJP has won 282 seats, enough to form the government on its own; with its allies it has 337 seats. (Five Factors that Helped BJP and Modi)

Promoted
Listen to the latest songs, only on JioSaavn.com
In contrast, the Congress, which ruled for two terms, is struggling to reach the one-fifth mark needed to have a Leader of Opposition in the Lok Sabha. In Uttar Pradesh, India's most politically vital state with 80 seats, the Congress won only two seats, those of Sonia and Rahul Gandhi. The BJP and its allies won 73 seats.

In his campaign, Mr Modi repeatedly attacked Sonia and Rahul Gandhi with references to "Maa-Beta sarkaar (mother-son government)", and contrasted his humble past as a tea seller with the 43-year-old Rahul's privileged upbringing.
Comments
Rahul GandhiSonia GandhiElection Results 2014Congress