Rebuffed by Congress, Suresh Kalmadi may run for election anyway 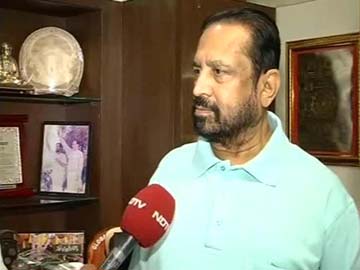 Pune: Suresh Kalmadi, a politician with considerable influence in Pune, today told NDTV that he is deciding on whether to run for the national election. Mr Kalmadi, 69, who was jailed on charges of corruption, has not been picked by his party, the Congress, as its candidate from Pune. The party also did not succumb to his pressure to let his wife run instead of him.

Mr Kalmadi has won the parliamentary election from Pune thrice. He told NDTV today that he is meeting with his supporters to decide whether to contest the parliamentary election from his home town, but refused to comment on whether he will run as an independent or join another party. "I am open to contesting the election," he said, adding, "I have done so much work for Pune." Several senior leaders of the Congress in Pune attended the meeting at his residence today, transmitting the signs of a potential crisis for the party.

Mr Kalmadi was suspended by the Congress in 2011 after he was  jailed in connection for the Commonwealth Games which were held in Delhi in October 2010. As Chairman of the Organising Committee of the event, Mr Kalmadi is accused of hiring ineligible companies who supplied over-priced equipment and services.

Promoted
Listen to the latest songs, only on JioSaavn.com
He is currently on bail.