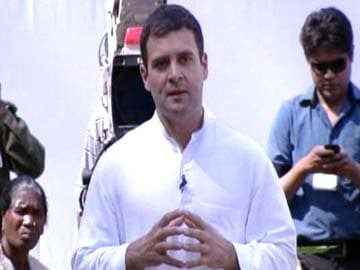 Ranchi: Congress Vice President Rahul Gandhi today held an interaction with tribal women in Jharkhand who urged him that they should get proper representation in Parliament and Assembly elections.

"Women should get proper representation in Parliament and Assembly elections," a woman told reporters after the interaction at a hotel in Ranchi.

"All of us also told Rahul that we would like to see him as the Prime Minister," a woman told reporters after the interaction.

Another woman said, "We told him about protection of women's rights from the grassroots level."

She quoted Rahul as saying women should come forward in politics in large numbers.

"Rahul also said Congress has old ties with tribals, who have made a large contribution to development programmes," she said.

Promoted
Listen to the latest songs, only on JioSaavn.com
"Food Security Act will also benefit the tribals," said another woman quoting him.

She said that Rahul was urged to ensure strict implementation of the Panchayat Raj Act (Extension to the Scheduled Areas) in Jharkhand.