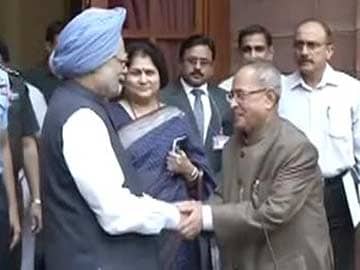 Before meeting President Pranab Mukherjee to submit his papers, Dr Singh addressed the nation for the last time, saying "each one of us should respect the judgement you have delivered."

In a short speech, Dr Singh, who was targeted repeatedly by critics over corruption scams and an economic slide in the last few years, said, "My life and tenure in public office are an open book. I have always tried to do my best in serving this great nation of ours."

India was a "far stronger country" than it was a decade ago, asserted the PM, who led the government for two successive terms. (read: Prime Minister's full speech)

"I owe everything to this country, this great land of ours where I, an underprivileged child of Partition, was empowered enough to rise and occupy high office. It is a debt that I will never be able to repay," said the 81-year-old.

"I wish the incoming government every success as it embarks on its task and pray for even greater successes for our nation."

The Congress is exiting power after its worst performance ever in elections. The party has been reduced to a double-digit figure in Parliament and is struggling to reach the number required for it to have a Leader of Opposition.

Congress president Sonia Gandhi and her son Rahul, who led the party's campaign, both accepted responsibility for the rout. (Rahul, Smiling, Says he Accepts Responsibility)

"The Congress has done pretty badly, a lot for us to think about. As vice-president, I hold myself responsible," said Rahul Gandhi.

Promoted
Listen to the latest songs, only on JioSaavn.com
Sonia Gandhi said, "The people's verdict is against us... As Congress president I take responsibility for the defeat."

Their statements came as the shocked party took in the magnitude of its defeat; the Congress has not won a single seat in 10 states and has not made it past single digits in the others.