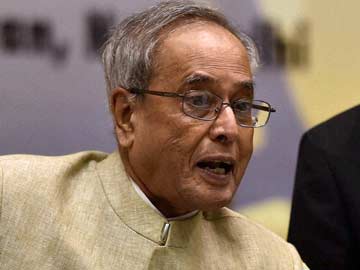 "The President accepted the advice of the Cabinet and today signed the Order dissolving the 15th Lok Sabha in exercise of the powers conferred upon him by sub-clause (b) of Clause (2) Article 85 of the Constitution," Rashtrapati Bhavan Press Secretary Venu Rajamony said.

The outgoing Union Cabinet, in its last meeting yesterday under Prime Minister Manmohan Singh, had advised the President to dissolve the 15th Lok Sabha with immediate effect.

After this, Parliamentary Affairs Minister Kamal Nath had called upon the President and handed over a decision of Cabinet with the recommendation.

The BJP secured majority on its own in the elections for the 16th Lok Sabha by winning 282 seats where as Congress could bag only 44.

Promoted
Listen to the latest songs, only on JioSaavn.com
The Election Commission will now be submitting the list of newly elected members of the 16th Lok Sabha to the President.

The list containing the names of all 543 Members of Parliament will be handed over to the President by a three-member EC team headed by Chief Election Commissioner V S Sampath.