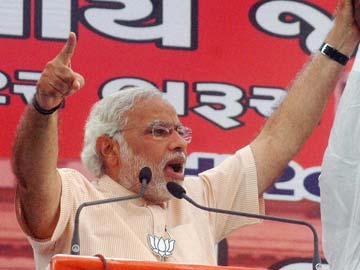 Kolkata: A day after it declared Narendra Modi "the butcher of Gujarat," Mamata Banerjee's party said that it is Mr Modi who owes an apology.

"He has said that a painting by Mamata Banerjee sold for 1.86 crore. He has to apologise for that," said Mukul Roy, a top leader of the Trinamool Congress. "He (Modi) violated all decency while speaking at a rally," Mr Roy added.

Mr Modi, the BJP's prime ministerial candidate, was addressing an election meeting in Bengal on Sunday when he professed that Ms Banerjee "has damaged Bengal more in 35 months than the Left did in 34 years."

He also asked why a painting by Ms Banerjee, who was elected chief minister in 2011, had commanded an alleged price of 1.86 crores. "Her paintings did not even sell for five lakhs," said Derek O'Brien of the Trinamool, adding that the money raised from Ms Banerjee's art was used to fund the party's electoral campaign. "Each time he (Modi) puts up his hand, you know metaphorically, there's blood actually rolling down his hand, the blood of innocent children," he said in an unmitigated new attack on Mr Modi.

Mr Modi did not name the businessman who bought that painting, but he was alluding to a controversial entrepreneur, Sudipta Sen, whose money marketing scheme collapsed, devastating lakhs of people. (Read: BJP hits back after Trinamool calls Modi 'butcher of Gujarat')

Promoted
Listen to the latest songs, only on JioSaavn.com
Ms Banerjee's party reacted to Mr Modi's comment with a strong statement that labelled Mr Modi "the butcher of Gujarat", referring to the riots in 2002 in which more than a thousand people were killed in communal violence in Mr Modi's home state. A Supreme Court inquiry has said there is no evidence that Mr Modi, as chief minister, fuelled the riots. A court in Gujarat has upheld that report.

"Trinamool can be criticised. Their leaders must accept this, criticism doesn't mean that we are their personal enemies or anything," said the BJP's Arun Jaitley today.