Election Results 2014: On Victory Day, Narendra Modi Tweets a Selfie With His Mother 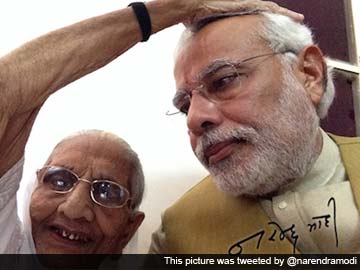 New Delhi/Gandhinagar: As soon as it became clear that he will be India's 15th Prime Minister, Narendra Modi visited his mother, Hiraben, at her house in Gandhinagar.  After he touched his mother's feet, she blessed him by placing her hand on his head. He then tweeted a selfie of him seeking her blessings. (Election Results 2014: Armed with Massive Victory, Narendra Modi Meets His Mother)

Mr Modi, 63, has captained the BJP to the strongest result by a political party since 1984. On the day that he voted, he tweeted a selfie of him with an ink-stained finger that pushed him into a controversy - he was seen flashing the party symbol of the lotus, which the Election Commission faulted as a gesture of campaigning, which is banned on polling days. (Narendra Modi's selfie stirs up yet another controversy)

The BJP, with its allies, has got a decisive majority in the general elections, accruing more than 300 seats. (Election Results 2014: Mission 272 Accomplished, Now Great Expectations From Narendra Modi)

Before her son visited her, Hiraben, 95, was seen praying. She told reporters, "He has my blessings and he will lead the country towards development."

Mr Modi has trounced the Congress, whose campaign was fronted by Rahul Gandhi.

Mr Modi has won both the constituencies he contested - in Vadodara in his home state of Gujarat and in holy city of Varanasi in Uttar Pradesh. (Election Results 2014: Narendra Modi Wins By Huge Margin in Vadodara)

He has spoken in his campaign of being the son of a lower-caste tea seller and has said his mother supported the family by working in neighbouring houses. She travelled by autorickshaw to vote in the national election in Gandhinagar.

As she savoured the prospect of her brother becoming India's prime minister, Vasantiben Modi chortled at the idea that a one-time tea boy would soon be calling the shots over Delhi's traditional elite.

Promoted
Listen to the latest songs, only on JioSaavn.com
"They can't believe it, can't believe that someone from such a simple background could beat them," Vasantiben told news agency AFP from her modest two-storey home, close to the town in Gujarat where the siblings grew up.

"We had never imagined that he would lead the entire country one day. He left the house and the family one fine day and years and years later, look where he is now," said his sister, who lives in the town of Unjha.
Comments
Election Results 2014: Narendra Modi