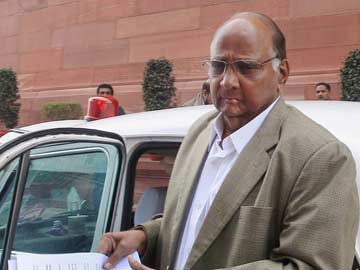 New Delhi: Union minister Sharad Pawar's Nationalist Congress Party, or the NCP, today renewed its ties with the Congress by clinching a seat sharing deal for the 48 Lok Sabha constituencies from Maharashtra. Sticking to the formula worked out five years ago, the Congress will contest 26 seats, and its junior partner the remaining 22.

The fate of the alliance was never in doubt, but the NCP had injected an element of uncertainty by telling its partner to respect the court's pronouncement clearing Gujarat Chief Minister Narendra Modi's name in the 2002 Gujarat riot cases. Mr Pawar had also set off speculation about his plans by holding a hush-hush meeting with the BJP's prime ministerial face in the capital on January 17.

The two UPA partners have, however, decided to fight the coming general election together to take on the might of a resurgent BJP-Shiv Sena-Republican Party of India (Athavale) combine. Opinion polls conducted by various agencies have put the NDA ahead in Maharashtra which sends 48 MPs to the Lok Sabha.

"We will continue the alliance. We have sealed it tonight,'' said Union Heavy Industries Minister and senior NCP leader Praful Patel after a meeting of leaders of the two parties.

In the 2009 Lok Sabha polls, the Congress-NCP alliance had emerged victorious in 25 seats, with the Congress bagging 17 seats, and the NCP 8. The BJP-Shiv Sena combine led in 20 seats.
Comments
CongressNCPLok Sabha elections