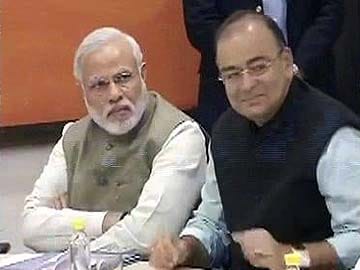 Narendra Modi and Arun Jaitley after the meeting.

The bulk of the 52 nominees announced today come from Karnataka, where the party declared 20 out of the 28 seats it plans to contest. Former Karnataka chief minister BS Yeddyurappa, who merged his party with the BJP earlier this year, has been nominated from his stronghold Shimoga.

Senior BJP leader Ananth Kumar, who read out the list at a press conference in Delhi today, has been nominated from South Bangalore against his Congress rival Nandan Nilekani.

Among the other nominees the BJP declared today are journalist-turned-spokesperson Chandan Mitra from Hooghly and singer Babul Supriyo from Asansol, both in West Bengal.

A total of nine seats from West Bengal, three from Kerala, five from Orissa and two from Tripura were declared today. The remaining list will be released on March 13, the party said.

There was no word on the nomination of the BJP's prime ministerial candidate Narendra Modi who presided over today's meeting. Mr Modi's supporters have launched a signature campaign to demand that he contest from Varanasi in Uttar Pradesh, a temple town represented by BJP veteran Murli Manohar Joshi.

Promoted
Listen to the latest songs, only on JioSaavn.com
Opinion polls predict that the BJP will emerge as the largest party in the national elections, but will fall well short of a majority. The party has allied with several regional parties across India to bolster its numbers.