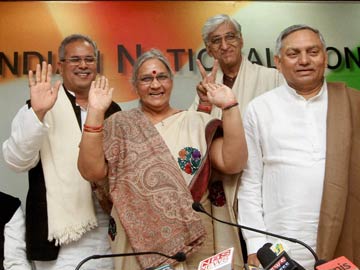 Hitting out at Mr Modi, Ms Shukla said the BJP has declared such a person its prime ministerial candidate "who did not fulfill the duty of a husband or rajdharma when he was chief minister.

If such a person talks about discharging rashtradharma, I will call it plain dishonesty".

Welcoming her into party fold, AICC general secretary in-charge Janardan Dwivedi said her joining Congress has symbolical value as "Karuna Shukla, who was brought up imbibing the value system of a person, who had immense contribution in the making of BJP has severed ties from that party because of bad culture that came there in recent years.

"The event has a bigger dimension for us as leaving that culture, she is joining Congress making an exit from one particular value system to the other."

63-year-old Karuna Shukla, who became MLA from BJP first in 1993 and was one of the senior leaders in Chhattisgarh, was unhappy over being sidelined in the party and had openly criticised the BJP leadership including Chhattisgarh Chief Minister Raman Singh on many occasions in recent past.

A former MP from Janjgir constituency of Chhattisgarh, she had lost the 2009 elections from Korba to Charan Das Mahant of Congress.

She resigned from BJP on October 25 last year alleging that the party was "under the grip of power politics".

Ever since there was speculation of her joining Congress.

Ms Shukla praised the praised the ideology of Congress and the "sacrifice" of Nehru-Gandhi family and expressed confidence that people will support the party and not BJP and the 2014 Lok Sabha elections will mark the end of "communal forces".

Attacking Mr Modi, she said people of the country will never allow such a person to become prime minister.

"Let him trumpet about the wave. It does not take time for the weather to change. Waves change fast," she said.

"I served the BJP for 32 years. The kind of degradation that has happened in the BJP since last 7-8 years is unparalleled. After Atal Bihari Vajpayee fell sick, a group has in a way captured the BJP," she said.

Ms Shukla claimed that her "pain" with the affairs in the BJP is not an individual thing only but "there are many who are undergoing this pain due to the total seize on the party by this particular group".

She said that she felt "humiliated" in the BJP and felt it was felt difficult the preserve the original ideology there anymore.

To a question as to whether she was referring to Mr Modi or Raman Singh by her refrain that BJP was captured by a group, she said when she is speaking from the national office of a party, her allegations are directed against the national leaders.

In the same breath she praised Congress saying people of the country know about the sacrifices made by this party and the family (Nehru-Gandhi).

"Vajpayee's house (BJP) was my first house. My Vajpayee Mayaka (parents' home) is no more with the end of the Atal era. Congress is my new house and I have to learn many things here. This party and this family have a glorious history. This party never butchered democracy. I feel proud to join this party with a rich heritage and history," she said.

Promoted
Listen to the latest songs, only on JioSaavn.com
Ms Shukla, however, refused to go into Mr Modi versus Rahul Gandhi comparisons but vowed to "expose the dynastic politics of BJP" saying she knows everything about the party where she worked for 32 years.