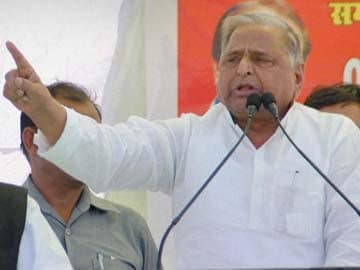 Mulayam Singh today clarified his remarks on rape, which have sparked outrage

He said he believed in harshest punishment for rapists, but added, "We will not let the wrong law to continue...all those behind fake cases should be punished."

He has been issued notice by the National Commission for Women. (Mulayam Singh's shocker on rape: who said what)

Pilloried nationwide over those remarks, the 74-year-old today said at another rally that he had been forced to clarify.

"This is a matter of debate, a debate brings good results. Many people said that my comments were right. I am against rape. Rapist should be given the most severe punishment. Innocent people should not be hanged. Rape is being debated in half the world. If I said this, what was wrong?" he said.

The three men he referred to on Thursday were convicted of gang-raping a photo-journalist and a telephone operator last year at the abandoned Shakti Mills in the heart of Mumbai. Last week, they became the first to be sentenced to death for multiple rapes, under tougher laws enacted after the fatal gang-rape of a young student on a moving bus in Delhi in December, 2012. (Shakti Mills gang-rapes: 3 convicts sentenced to death for repeat offence)

Mulayam Singh's party has promised in its poll manifesto to check what it calls the "misuse" of those laws.

Promoted
Listen to the latest songs, only on JioSaavn.com
The parents of the 23-year-old, who died from horrific injuries after being tortured with an iron rod, condemned the Samajwadi Party chief's comments. "If a gang of people rapes a woman, it is not a mistake... it is a crime," said her father. (Rape is not a 'mistake': Delhi Braveheart's parents deplore Mulayam's shocker)

Anger against the Samajwadi Party was further fueled by another party leader Abu Azmi's comment that seemed to imply that women who were raped should be hanged. (Now, Mulayam man Abu Azmi says women having sex should be hanged)

Navjot Sidhu's Outreach To Punjab Women Ahead Of Assembly Elections