The purifier has Wi-Fi and touch interface and the functioning can be ascertained in real-time.
Chennai:

The purifiers have Wi-Fi and touch interface and the functioning of the purifier, in terms of the quantum of pollutants in the air, can be ascertained in real-time.

"Vistar 550 has coverage area of 550 square feet. The filter will have a life of about one year, which is twice that of the air purifiers currently available in the market," said the statement. 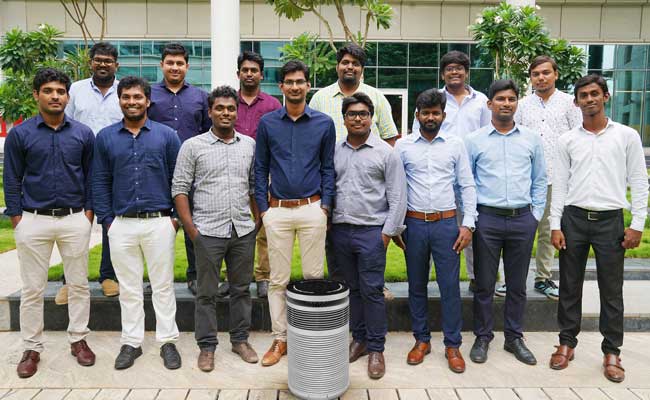 Addressing the launch function, Prof. Ashok Jhunjhunwala said, "Ever increasing air-pollution in Indian cities is having severe impact on health of its people. We need a war on pollution causing elements. But in the meanwhile, we need to minimise its impact, by cleaning air, wherever it is possible. AirOK has come up with something which will make great an immediate difference to our lives."

The air purifier will be priced at around Rs. 20,000, almost half that of those in the market now as affordability is a key area for AirOK. The Startup can manufacture up to 30 units per day currently and can increase the production capacity to 1,000 without any major additional investment.

Delivering a video message on the occasion, Prof. Bhaskar Ramamurthi, Director, IIT Madras, said, "I've seen this product evolve over the months in the Institute workshop. The product is as good as any other product that's made anywhere in the world. It looks fabulous and I hope it gets very good acceptance in the market."

AirOK's technology caught the interest of SAR Group, makers of water purifiers under Livpure brand, which has invested about ₹ 12 crore in AirOK late last year and will be the distribution partner for AirOK's retail air-purifier product.

Speaking on necessity for such technology, Mr. Deekshith Vara Prasad, Founder and Chief Executive Officer of AirOK, said, "Breathing air is a basic necessity and I do not think that we need to compromise on that. Our rule is very simple, it is to make air clean. We, at AirOk, do not count time in seconds but on the number of clean breaths we provided."

The product's superior technology has been validated by laboratory and field tests.

"The positive results of the laboratory tests were conducted by Shriram Institute for Industrial Research, Bengaluru and field trials by a leading Children specialty hospital in Chennai. They stand as a testimony to the AirOK team's ability to develop first-in-class solutions," the IIT Madras statement said.