A research team from IIT Mandi has developed a new material which can use sunlight to produce hydrogen from water. 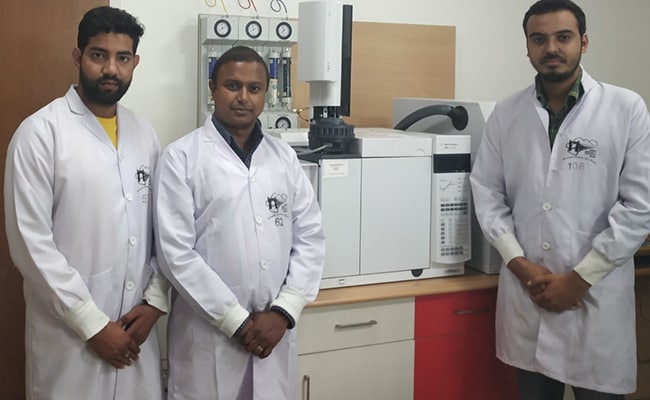 A research team from IIT Mandi has developed a new material which can use sunlight to produce hydrogen from water. The research project was taken up in collaboration with researchers from Yogi Vemana University in Andhra Pradesh.

Dr. Venkata Krishnan, who is an Associate Professor at the School of Basic Science in IIT Mandi, led the research. Dr. Suneel Kumar, Mr. Ajay Kumar, and Mr. Ashish Kumar from IIT Mandi along with Dr. M. V. Shankar and Mr. V. N. Rao of Yogi Vemana University, Andhra Pradesh were art of the team that made the discovery. Results of their recent study has been published in American Chemical Society (ACS) Applied Energy Materials journal.

Speaking about the significance of the research, Dr. Venkata Krishnan said, "With concerns of dwindling fossil fuel reserves and environmental issues associated with their use, there has been an impetus to develop alternative, safe fuels. Hydrogen gas, with its high energy yield and eco-friendliness has been identified as a potential energy vector that can herald a new hydrogen-based economy."

"The catch with hydrogen economy is that the gas is now largely obtained from fossil fuels by petroleum and natural gas steam reforming processes, which does not help with the problem we set out solving - finding alternatives to fossil fuels", added Dr. Krishnan.

Nature already uses light from the sun to bring about all kinds of chemical conversions that provide us today with the air we breathe and the food we eat. Mimicking photosynthesis - the use of light for chemical reactions - has been one of the Holy Grails of applied chemistry and there has been a constant quest for specialized chemicals called catalysts, which can take the energy of the light to the water to split it, much like the chlorophyll that does it effortlessly in nature.

For a long time, platinum has been used as catalyst for photochemical water splitting, but given the cost of platinum, solar hydrogen generation has been out of practical reach.

The researchers have developed a novel multicomponent catalyst comprising nitrogen doped zinc oxide nanorods coated with molybdenum sulphide nanosheets. Materials in the nanometre scale, a scale that is a hundred thousand times smaller than the width of a single human hair, have high surface area-to-volume ratio, improved physical properties and tuneable electronic properties, all of which make them suitable for photocatalytic activities.

On a technical level, this improvement has been attributed to three facts, viz., the zinc sulphide that is in situ generated during the photocatalysis, the abundantly exposed sulphur edge atoms in defect-rich molybdenum sulphide nanosheets, which has strong affinity for positive hydrogen ions, and the intimate heterojunction formed between zinc oxide and molybdenum sulphide, which facilitates charge transfer efficiency.

This collaborative research work by IIT Mandi and Yogi Vemana University has not only provided an easy method to fabricate the N-ZnO-MoS2 nanosheet heterojunctions but has also offered insights into the scope of exploitation of such materials for hydrogen fuel generation using water and sunlight.

"Our work provides the facile strategy for the rational design of efficient and recyclable photocatalysts for solar-to-hydrogen fuel conversion", said a confident Dr. Krishnan, on the future implications and potential of their findings.