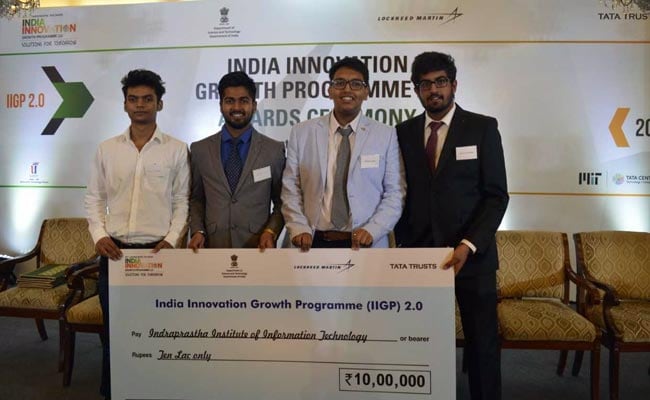 The team has got a support of Rs 10 lakh for their project which is "A multipurpose VTOL (Vertical Take Off Landing) hybrid UAV for smart cities".

The winning teams will be attending regular workshops and boot camp in IIT Bombay and IIM Ahmedabad for the upcoming year. In addition to this MIT Tata centre will host the winners for a week at MIT and expose them to the Cambridge entrepreneurial system. Along with this, successful students have also been awarded with a small training and mentoring trip to Massachusetts Institute of Technology (MIT).

IIGP 2.0 is a tripartite initiative taken by the DST, Government of India, Lockheed Martin, and Tata Trusts.

Following the trails of Start-up India and Make in India campaigns, IIGP 2.0 also aims to improve the Indian innovation ecosystem by supporting the budding innovators and entrepreneurs. Lately, it organized a University Challenge Downselect competition for picking out some of the best technological projects in social and industrial innovation.

Around 700 teams from leading universities in Tier 1, Tier-II, and Tier-III cities in India participated in the competition, but only 15, including IIIT-D are selected as winners.

"It's a moment of pride and celebration for all of us as our students become motivation for others. Many congratulations to them as their hard work have paid them off really well," the team's mentor Dr. P.B Sujit, Assosciate Professor, IIIT-Delhi said while congratulating them.