CBSE has postponed class 10, 12 board exams in the north east part of Delhi scheduled on February 28 and 29. The Board said it would conduct fresh exams for those who missed their papers.

CBSE: All the exams will be held as per schedule in all centres from March 2 onwards.

The Central Board of Secondary Education (CBSE) has assured all the students in Delhi, who have missed their papers due to the violence that happened in North East Delhi, that it will conduct fresh exams for them. The Board has postponed exams scheduled in the north east part and the affected parts of Delhi till February 29.

However, the exams in rest of Delhi will be conducted as scheduled, an official statement from the Board said.

All the exams will be held as per schedule in all centres from March 2 onwards, the Board added. 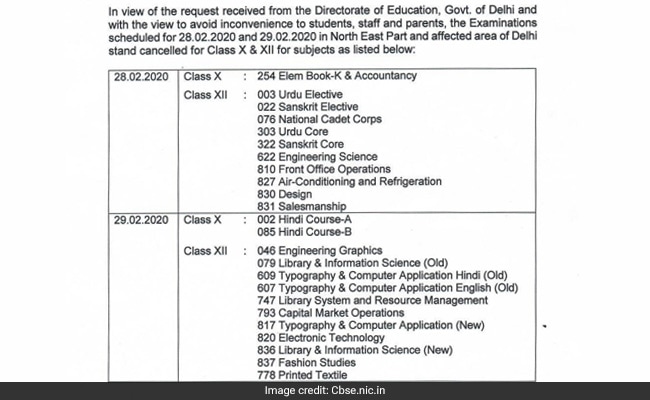 CBSE has postponed class 10, 12 board exams in North East Delhi for February 28 and 29.

The Board exams are also going on in schools affiliated to CISCE. According to an official from the CISCE none of their schools are situated in the North East part of Delhi. So there is no question of postponement of board exams.

Fresh Exams For Those Who Missed Out

"... it has been brought to the notice that some students residing in the affected areas have not been able to appear in exams outside the affected areas and vice-a-versa due to the situation prevailing in the city," Board Secretary Anurag Tripathi said in a notification.

The Board has asked school heads for the details of all class 10 and class 12 students who have missed the exams in Delhi.

"Therefore keeping the future interests of the students in mind, the board has asked the principals to send the details to concerned regional offices of CBSE of all such students of Class X and XII who have missed out on the exams so far in Delhi, due to these difficult conditions," the notice also reads.

The Board says it is regularly in contact with the principals of all schools, especially those in the affected areas.

"The next date of exam for affected students will be notified shortly," the Board has said assuring the students who have missed their papers.

Meanwhile the exam is being held smoothly in other parts of the country, it said.