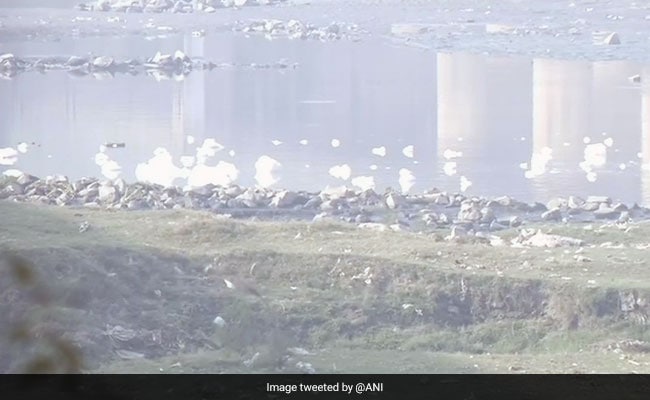 The level of dissolved oxygen (DO) -- the amount of oxygen available to living aquatic organisms - is "nil" at seven of the nine ghats along the banks of the Yamuna in Delhi, according to the latest tests conducted by the Delhi Pollution Control Committee (DPCC).

Aquatic life is put under stress if dissolved oxygen levels in water drop below 5 milligram per litre, according to experts.

DO levels were 7.5 mg/l at Palla, where the Yamuna enters Delhi, and 6.3 mg/l at Surghat (downstream of Wazirabad barrage).

At rest of the places - including Khajori Paltoon Pool, Kudesia ghat, ITO bridge, Nizamuddin, Agra canal (Okhla), after meeting Shahdara drain and Agra canal (Jaitpur), the DO levels were "ni", according to DPCC's "water quality status of river Yamuna" report.

This means the river was relatively clean at Palla, but the water quality deteriorated significantly by time it reached Khajori Paltoon Pool, which falls downstream of Najafgarh drain.

However, in October, the DO levels were "nil" only at three places -- Khajori Paltoon Pool, Kudesia ghat and ITO bridge. This means the Yamuna water quality deteriorated over the last month despite no immersion taking place.

The BOD was the highest at Khajori Paltoon Pool (45 mg/l) in November and at Kudesia ghat (50 mg/l) in October.

Biochemical oxygen demand is the amount of dissolved oxygen used by microorganisms in the biological process of metabolizing organic matter in water.

High BOD levels mean there is a high level of microorganisms in the water, and a high content of organic material that is broken down by the organisms.

The greater the BOD, the lower the amount of dissolved oxygen available for fishes and other aquatic life.

Visuals of toxic froth floating on the surface of the Yamuna in Delhi also made their way back to social media recently, with experts citing detergents as one of the major reasons behind the pollution.

The majority of the detergents in the country don''t have a certification by the ISO (International Organization for Standardization), which has capped the concentration of phosphates in the chemical substance, an official of the Central Pollution Control Board (CPCB) said.

The primary reason behind the formation of the toxic foam was high phosphate content in the waste water because of detergents used in dyeing industries, dhobi ghats and households, according to the official.

"A large number of unbranded detergents are also used in households and dyeing industries. The waste water containing high phosphate content reaches the river through untapped drains," he said.