Woman allegedly tortured for giving birth to a baby girl 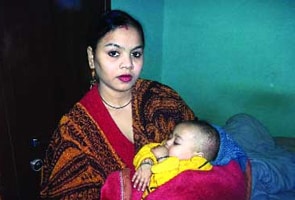 New Delhi: In her three years of marriage, 21-year old Vandana was often tortured by her in-laws just because she used to demand a little privacy for herself. Things came to worse when in July last year she gave birth to a baby girl. She was thrown out of the house the moment she returned from the hospital with stitches still intact.

"My father gave everything he had in the wedding ceremony. My husband owns a dairy and they have a 4 storeyed house in Wazirabad. We are not facing any financial crisis. They only kicked me out because I gave birth to a baby girl," said Vandana

"They often tortured me when I asked for privacy before I was pregnant but suddenly they told my parents that my behaviour was not good so they don't want me to live with them. For three years there wasn't any behaviour problem. After I gave birth to a girl, they started finding excuse to throw me out," added Vandana.

After the incident, Vandana approached Women Commission and Rajouri Garden police station. Police started probing the case and after six months of the incident, they called both husband and wife to the police station. "On Monday, the cops assured me that they will register a case against him. The cops asked Satyendra (her husband) about why he doesn't want to stay with me. He repeated that my behaviour was bad. I told the cops that I want to live with my husband or otherwise I want my and my daughter's maintenance from him," Vandana added.

The police have given them time to settle the matter as it is a family dispute. "This is a family dispute and in such cases we give time to the family to settle the case but now if the complainant still wants action, then we will have to probe and register case accordingly," said a police officer. The family members of the accused didn't replied to the phone calls of MiD DAY.
Comments
DelhiWoman torturedGirl child

Delhi Likely To Get Respite From Heat After June 20: Weather Official