Why Quality Test Only In Delhi: Water Body's Swipe At Centre

Delhi BJP president Adesh Gupta had on Tuesday urged the Union jal shakti minister to order a test of the quality of water being supplied in the national capital, alleging that people consuming it were falling sick. 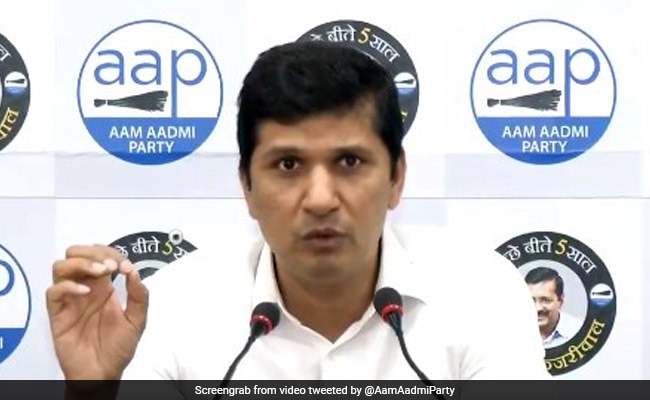 Addressing a press conference at the AAP headquarters here, Bharadwaj said he has written a letter to Union Jal Shakti Minister Gajendra Singh Shekhawat, apprising him of the prevailing "crisis" due to contaminated water in the four BJP-ruled states.

Delhi BJP president Adesh Gupta had on Tuesday urged the Union jal shakti minister to order a test of the quality of water being supplied in the national capital, alleging that people consuming it were falling sick.

In a letter, the BJP leader alleged that people were compelled to drink "smelly and contaminated" water, and demanded that cases be registered against Delhi Chief Minister Arvind Kejriwal, Water Minister Satyendar Jain and Delhi Jal Board (DJB) vice-chairman Bharadwaj.

"He (Shekhawat) is a central water minister, and if he pays attention to Delhi only, the hearts of those living in other states will be broken. They will feel they are being ignored," Bharadwaj said. "So, I sincerely request the Union water minister to order a probe into the quality of water available in these (four) states as well." The AAP leader claimed that major cities of Gujarat, including Ahmedabad, Palanpur, Mehsana, Patan, Banaskantha and Sabarkantha, have been staring at "a huge crisis due to highly contaminated water".

"Gujarat, a BJP-ruled state, faces a huge water shortage. This claim has been made repeatedly by BJP leaders from Patan and Banaskantha. Some days back, in Gandhinagar, 554 people fell ill because of consuming contaminated water. Prior to that, over 50 students in Kutch fell terribly ill and were hospitalised due to contaminated water," he added.

In Himachal Pradesh, the level of contamination in groundwater and river water was so high that the high court summoned and pulled up the chief secretary for this, Bharadwaj claimed.

In Uttar Pradesh, people in cities like Bundelkhand, Mirzapur, Mahoba, Sonbhadra, Ghaziabad and Firozabad were forced to drink sewer-like water on top of a water shortage, he claimed.

"People are complaining of jaundice, typhoid and liver-related diseases due to consumption of contaminated water in Madhya Pradesh," the AAP leader added.

The DJB vice-chairman said he has apprised the Union minister of the prevailing situation "in other states like BJP-ruled Gujarat, Himachal Pradesh, Uttar Pradesh and Madhya Pradesh", and requested him to add these four states in his list for ordering a probe.

"Under the Jal Jeevan Mission being run in Uttar Pradesh, they are buying pipes from such companies that have been blacklisted by about half-a-dozen states," he alleged.

Mr Bharadwaj, however, refuted the Delhi BJP chief's allegations, and said water quality of 90 percent of samples collected in the national capital were found to be "good".

Whenever complaints come, attempts are made to address the problem, he added.

The Delhi BJP hit back at the AAP leader, and said people of Delhi were "shocked" to see him deny "the water crisis" in the national capital.

"Bhardwaj has in his letter tried to suppress Delhi's water crisis by raising problems of other states. He has played with emotions of people of Delhi especially those living in low-end colonies, clusters and villages," Delhi BJP spokesperson Praveen Shankar Kapoor said in a statement.

It is sad that the Delhi Jal Board vice-chairman, instead of trying to resolve the water crisis, is trying to mislead the people of Delhi "with his politically motivated statements", he added.