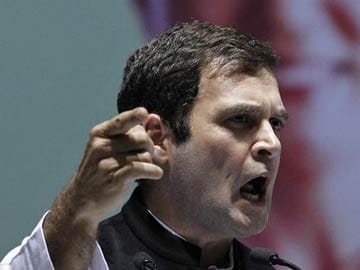 New Delhi: Rahul Gandhi, who is leading the Congress party's campaign for the national election, reportedly rebuked Home Minister Sushil Kumar Shinde for supplying a compromise to Arvind Kejriwal, which allowed the Delhi Chief Minister to end his demonstration while claiming victory.

Mr Gandhi, sources said, asked at a meeting on Tuesday night at his house why the party's top leadership - including his mother and party chief Sonia Gandhi - had not been consulted about the offer made to Mr Kejriwal. The chief minister was told that two of five police officer that he wanted suspended would be asked to proceed on paid leave and that an enquiry against the cops would be fast-tracked. In exchange, Mr Kejriwal was to clear out of the high-security zone he had occupied so that security forces could sanitize the area and prep it for Sunday's Republic Day parade.

"There is no truth in the story that Rahulji is unhappy with Shindeji on his handling of Kejriwal dharna," said Congress spokesperson Ajay Maken to NDTV, contradicting other Congress leaders who attended the meeting at Mr Gandhi's house.

Home Minister Shinde was one of the twin targets of Mr Kejriwal's protest. The other was the Delhi Police, which reports to the minister. (Read: 77% complaints on anti-corruption helpline about police: AAP justifies its campaign)

The truce between the Centre and Mr Kejriwal was allegedly engineered by Delhi's Lieutenant Governor Najeeb Jung, who also negotiated with leaders from Mr Kejriwal's Aam Aadmi Party or AAP to deliver an exit route from a protest that was not going as planned. (Blog: What Kejriwal's protest proved by Captain Gopinath)

Mr Kejriwal's protest, held in biting cold and rain, had not drawn large crowds. The fact that the city's highest elected official was holding it hostage triggered a wash of criticism.

Promoted
Listen to the latest songs, only on JioSaavn.com
Critics felt the Aam Aadmi Party (AAP) was looking for cover that would allow it to call off the demonstration. Mr Shinde's offer filled the gap.