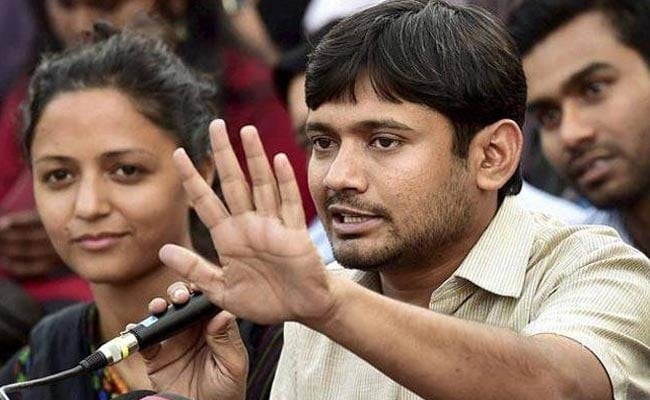 New Delhi: JNUSU President Kanhaiya Kumar today told Delhi High Court that the penalty imposed on him by JNU's appellate authority in connection with the controversial February 9 event was "completely incorrect" and varsity should not "fight" with its students in such a manner.

Mr Kumar said this during a hearing on his plea against the August 22 order of varsity's appellate authority imposing a fine of Rs 10,000 on him and asking him to give an undertaking that he would not involve in any unauthorised event and abide by all rules and regulations.

Justice Sanjeev Sachdeva sought response of JNU on the plea, after which the JNU counsel said she would file a short affidavit within three weeks.

Senior advocate Rebecca John, appearing for Mr Kumar, told the court that appellate authority had wrongly recorded in its order that his client had not answered the questions as he had specifically denied allegations levelled against him by a high-level enquiry committee (HLEC).

HLEC was set up to look into the matter relating to the February 9 event in which anti-India slogans were allegedly raised inside the campus.

"I (Kanhaiya Kumar) am a political activist and penalty imposed upon me is completely incorrect. A university of this stature is fighting with its students like this," Ms John said.

The court then asked JNU counsel, "Why are you insisting on fine and undertaking till the next date (of hearing)?" After the counsel said the university would not insist on it, the court fixed the matter for hearing on October 19.

Besides Mr Kumar, seven other students of JNU have also challenged the appellate authority's order.

When the court was told that fines were imposed on most of these students, and in one matter, the authority had even ordered withdrawal of hostel facility of a student, the JNU counsel assured that no action would be taken against these students as of now.

To this, Justice Sachdeva asked, "Do I need to pass any order or you (JNU) will hold your hands?" The university counsel responded saying "We will hold our hands."

The court fixed for September 8 the matter of the student whose hostel facility was ordered to be withdrawn.

The high court had yesterday asked JNU not to implement for a week the order passed by its appellate authority holding students Umar Khalid and Anirban Bhattacharya guilty of indiscipline in connection with the February event.

Promoted
Listen to the latest songs, only on JioSaavn.com
The court's direction had come on the pleas by Mr Khalid and Mr Bhattacharya, who were penalised along with 19 other students, challenging the findings of the appellate authority.

While Khalid has been rusticated from the university till December this year, Mr Bhattacharya has been directed to be out of university for five years. Arguments on their pleas would be heard on September 8.