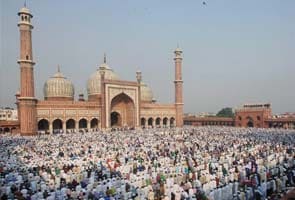 New Delhi: Dressed in traditional fineries, Muslims across the capital today thronged the city's mosques to offer their prayers on the occasion of Eid-ul-Azha.

"People prayed for peace and unity in the country. They greeted one another and exchanged sweets and gifts," Maulana Mufti Mohammed Mukkaram, Shahi Imam of Fatehpuri Masjid in old Delhi, told IANS.

After the prayers and the customary greeting of hugging one another and wishing 'Eid mubarak', comes the highlight of the festival, the sacrificing of animals commemorating the sacrifice of Prophet Ibrahim.

In keeping with the tradition, the meat of the sacrificed animals is distributed among friends, neighbours, relatives and the poor.

Faizan Umar, a resident of Chandni Chowk in Old Delhi, sacrificed half a dozen goats and lambs.

"The animals have been sacrificed and the raw mutton has been distributed as per tradition. Now dishes like biryani, korma, achari gosht, mutton stew as well as sewaiyan (sweet vermicelli) are being prepared," Umar said.

"A feast will take place in the evening with family and friends," he added.

The liver of sacrificed goats and lambs is considered to be a delicacy.

Promoted
Listen to the latest songs, only on JioSaavn.com
"It is chopped and fried or cooked in gravy and consumed immediately. It is believed to strengthen the immune system and makes one energetic," said Saima Qureshi, a resident of Jamia nagar in south Delhi.