'Mosquito Terminator' Train Flagged Off, To Spray Insecticide In Delhi

Insecticide will be sprayed from a power sprayer mounted on a truck placed over the train, and it will cover an area falling within 50-60 metre range on both sides of railway tracks, officials said. 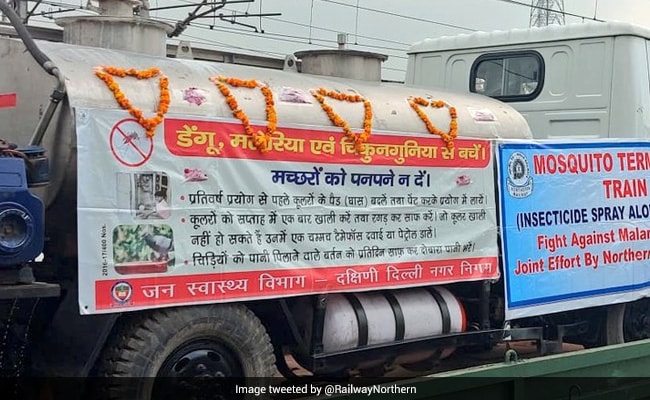 A "mosquito terminator" train to spray insecticide on both sides of rail tracks to prevent growth of mosquito larvae was flagged off on Friday from the New Delhi Railway Station, officials said.

The officials from the South Delhi Municipal Corporation and the Northern Railway jointly flagged off the train from platform number one of the station.

Insecticide will be sprayed from a power sprayer mounted on a truck placed over the train, and it will cover an area falling within 50-60 metre range on both sides of railway tracks, SDMC officials said.

"In order to substantially mitigate the threat of vector-borne diseases, including chikungunya and dengue, this is an effective effort to eliminate mosquito larvae," an official said.

The SDMC has provided a huge power sprayer and insecticide in adequate quantities.

This preventive measure will go a long way in protecting thousands of people from chikungunya and dengue. It will not only eliminate larvae but also neutralise mosquitoes, the officials said.

It will also provide desired relief to a large number of people living in JJ clusters along rail tracks.

The train will help in spraying insecticides for 10 days between August 30 and October 20, and it will also pass through the localities of the NDMC and EDMC, the SDMC official said.

The terminator train covers a distance of about 150 km in each cycle.

Apart from water bodies, the train sprays insecticides over depression created on both sides of railway tracks, where chances of mosquito-breeding remain high after rains.

This annual drive is a precautionary measure to minimise mosquito-breeding alongside railway tracks, the officials said.