Lok Sabha Elections 2019: Ramesh Bidhuri had called the Aam Aadmi Party (AAP) chief a b***** (pimp). He said it in the presence of Union Minister Giriraj Singh, who also targeted Arvind Kejriwal in his speech. 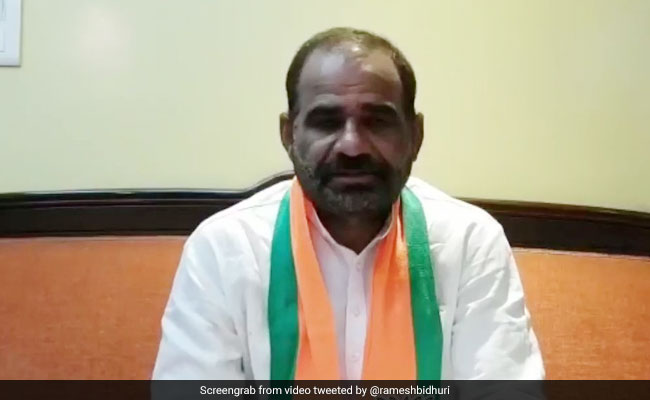 The BJP's Ramesh Bidhuri, today justified his use of abusive language for Arvind Kejriwal at a public meeting in Delhi to campaign for the national election. "I will say this again and again, I don't think I said anything wrong," said the BJP candidate from South Delhi on Thursday.

At a meeting in Mehrauli on Tuesday, Ramesh Bidhuri had called the Aam Aadmi Party (AAP) chief a b***** (pimp). He said it in the presence of Union Minister Giriraj Singh, who also targeted Arvind Kejriwal in his speech.

Asked about the comments today, Mr Bidhuri was unrepentant. "I'll say this today as well. If you don't call a cow a cow, a rat a rat and a donkey a donkey, then what will you call them," he questioned.

Mr Bidhuri, who is defending the seat, faces AAP's Raghav Chadha and Congress's Vijender Singh in the election.

At the Tuesday rally, Mr Bidhuri made the remarks while attacking Mr Kejriwal over the JNU sedition allegations and accusing him of "sitting" on a 2016 case file on former student union chief Kanhaiya Kumar and other students accused of organising a tribute for terror convict Afzal Guru. "Ye kab tak rokega (How long can he stop the case?) He only has five-six months left," he said.

He had also said Mr Kejriwal had been "licking (Delhi Congress chief) Sheila Dikshit's boots till six months ago" for an alliance, despite swearing on his children that he would never tie up with the Congress.

Tasteless comments have been the hallmark of the marathon national election in which the ruling BJP is fighting for re-election.

Delhi will vote on Sunday. The BJP holds all seven parliamentary seats in the capital and faces triangular contests in them with AAP and the Congress.