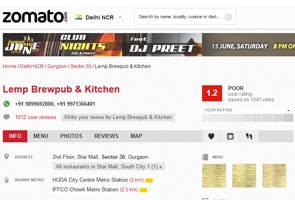 New Delhi: Since Tuesday, Lemp has been trending on Twitter.

Lemp Brewpub, at a mall in Gurgaon, is in the online hot spot after an anonymous blog posted on Blogspot described a Sunday afternoon from hell for a group of eight. The blog has now been removed. (Read the blog post here)

The blog says that a group of friends in their 20s saw an ad posted by the resto-bar on Zomato.com for a "Hawaiian Sunday brunch" for Rs 999 including taxes.

Zomato.com is an online directory that lists restaurants in various cities along with user reviews.

The blog claims the restaurant's manager - and later its owner - intimidated the group when it objected to a multitude of problems. The menu did not match the ad; nor did the rates. The group refused to pay a bill of Rs 12,000 on the grounds that they were being grossly over-charged. "The buffet costs Rs 999 inclusive of all taxes and we were only 8 people there! We are told that the food we sent back will also be charged and other dishes prepared for the buffet which were still to come to us will also be charged!" the blog says.

The group says "three guys and a girl" from the group then tried to leave but were reportedly stopped by bouncers from getting into the elevator, so they phoned the police for help.

The restaurant owner allegedly threatened to file a case against them. "We are dragged out of the mall by the police into their van," the blog states.

Later, the blog says, the group at the police station phoned their parents who picked them up.

The blog describes what the girl who was allegedly a part of this encounter went through- "She was wearing shorts and a t-shirt. The Lemp waiters/staff were leching on her and kept staring at her legs. When one of us told one of their staff members "Aap apni aankhein please oopar rakhiye" ("Please keep your eyes up") he replies, "Kya karoon neeche hi chali jaati hain." ('What can I do, my sight goes downwards automatically'). This happened while the cops were there."

When NDTV phoned Lemp for comment, an employee who refused to be identified said, "We will be releasing a statement by today evening or tomorrow, you can take it from there."

According to an article in the Times of India, the owner of the restaurant has reportedly filed a police case against whoever wrote the blog.

The same article has Lemp's version. "The youngsters ran up a bill of Rs 12,000. When asked to pay they misbehaved. I had to come in and call up the police. The youngsters paid only Rs 4000 and yet made false accusations about us on the Web," a spokesman of the pub said to the newspaper. (Read the article here) The article also says that the police denies that the group of customers was taken to the police station.

Zomato.com has addressed the controversy on its website. (Read Zomato's statement here)

Its post says, "We have been getting quite a few requests to delist Lemp from Zomato. What we think is that delisting Lemp would be the stupidest thing to do. Zomato is a neutral platform where consumers write about their opinions and we respect that. Our job is to tell our users if they should go to a particular restaurant or not. Delisting restaurants defeats that purpose. For restaurants which are very poorly rated, we want our users to see their ratings/reviews and decide not to visit that place."

Promoted
Listen to the latest songs, only on JioSaavn.com
The company goes on to say it cannot guarantee against false advertising. "Zomato only displays what is sent to us via email by the restaurant owners or their PR firms. So essentially, all these offers are validated offers from the management itself. However, whether the restaurant eventually honours the offer is entirely up to the restaurant. In this case, what has been outlined in the blog against Lemp is that the manager even confirmed the offer on the phone, but refused to honour it on the premises. There is nothing anyone can do about such behaviour."