Karol Bagh Hotel Fire: According to the police, Rakesh Goel, the owner of Arpit Hotel in Karol Bagh, committed many transgressions and turned it into hotel by violating NDMC rules. 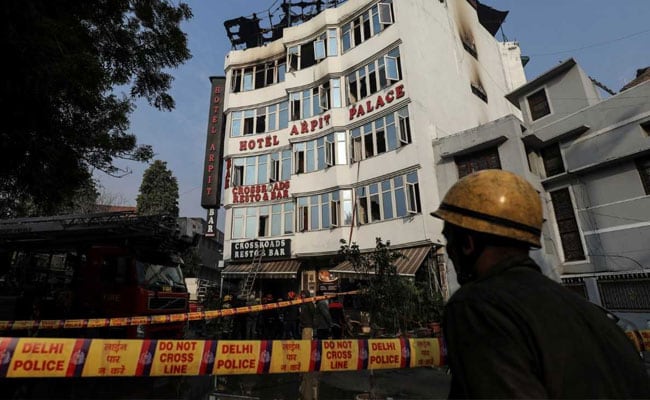 The gutted Arpit Palace Hotel in Delhi's Karol Bagh area appears to have been built on a slew of violations, with one of them being to not leaving any free space as per municipal by-laws and using 100 per cent of the land for building the hotel.

As per the municipal building department laws, a hotel or a guest house, should be built on only 60 per cent of the land, leaving 40 per cent as open space in the front and back for parking, emergency exits, ventilation, courtyard and other facilities.

"During interrogation, Rakesh Goel said he had bought 435 square yards of land in 1988. He constructed the building in 1992 and started running the guest house in 2000 after taking permission from the NDMC, the Fire Department and other licensing agencies," a Crime Branch officer told IANS.

"We have recovered all the crucial documents related to Arpit Hotel from Goel, including registry and guest house permission document and other NOCs," the officer said.

According to the police, he committed many transgressions and turned it into hotel by violating NDMC rules.

"Goel said in his statement if he did not violate the NDMC building bylaws, he could have only 15-20 rooms on the 60 per cent land. He wanted to make it a profit-making entity and constructed 48 rooms using the entire 435 square yard area and turned the guest house into a hotel," the officer said.

The officer said hunt is on to arrest Goel's elder brother Shardendu Goel who has applied for an anticipatory bail.

Goel is also said to have admitted that he acquired a No Objection Certificate or NOC and approval for the guest house through corrupt means. "We are trying to identify the officers who helped Goel brothers and will book them as per law," the officer added.

According to investigations, the source of fire was a spark from an AC in Room No 109, which later covered the entire building. The crime branch is taking help of 3D technology to recreate the entire scene for leads into the case.

"We are taking help of experts from a Florida-based 'FARO' 3D measurement and imaging company that is using 3D laser scanning technology and mapping to collect critical proof. They have also conducted the CAD-based inspection and did 3-dimensional analysis to recreate the fire sequence, from beginning to rescue operation," the officer said.