After Saturday's high drama, two teachers from the Grievance Redressal Cell were appointed as observers during JNUSU counting 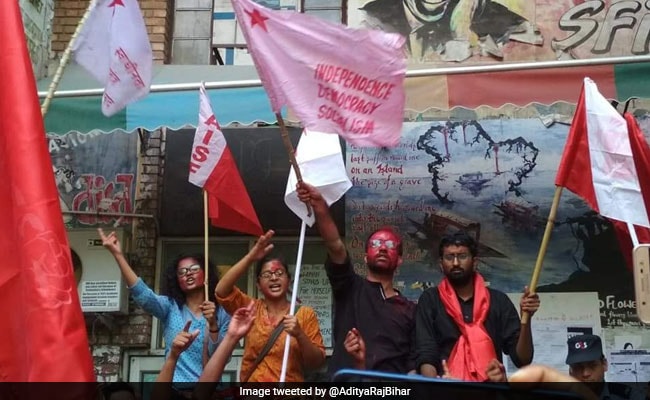 The Left unity has won all four key posts in the Jawaharlal Nehru University Students' Union (JNUSU) polls. Counting of votes resumed Saturday evening after it was suspended for nearly 14 hours. Members of the Akhil Bhartiya Vidyarthi Parishad (ABVP) claimed that counting had started without informing them.

The Left group's N Sai Balaji has been elected as the president, Sarika Chaudhary as the vice president, Aejaz Ahmed Rather as the general secretary and Amutha Jayadeep as the joint secretary.

There was high drama on Saturday following which two teachers from the Grievance Redressal Cell were appointed as observers for the exercise, officials said.

The voter turnout in the keenly contested JNUSU election on Friday was 67.8 per cent, believed to be the highest in six years. Over 5,000 students had cast their votes.

Besides the Left bloc, there were candidates of the ABVP, the NSUI (National Students' Union of India) and BAPSA.

The JNUSU poll results come within days of the Delhi University student body elections, which were marred by allegations of cheating, after the chief electoral officer in the national capital clarified that the Election Commission never gave the EVMs, several of which malfunctioned on counting day.

The election panel's statement that the EVMs used in the DUSU polls were not issued by them came after some NSUI and ABVP supporters clashed at a counting centre in north Delhi's Model Town on Thursday. Counting was stopped for some time after several EVMs malfunctioned.