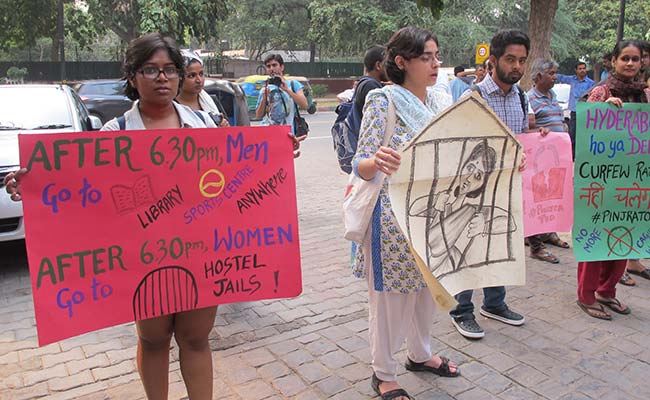 Students of Delhi University at a protest rally.

New Delhi: Nilanjana Paul is a female college freshman living in a dorm in India, which means many of the things college students routinely do in other parts of the world are off limits to her.

When she'd like to stay out late with friends or study at the campus library until midnight, she can't because the rules in her women-only dorm at Delhi University say all students must be in their rooms by 8 p.m.

And whenever she does leave the dorm, she says, she's peppered with intrusive questions from the dorm warden: Where is she going? What is the name and telephone number of the person she's meeting? When will she return?

University officials say it's all in the name of safety in a city where sexual assaults against women are on the rise.

But Paul and scores of other students recently launched a campus campaign called "Pinjra Tod," or "Break the Cage," to point out that the curfews to keep women safe are also an invasion of privacy that restricts their freedom and mobility.

In the past month, students have conducted a late-night march, a public hearing to air complaints, signature campaigns, online petitions and classroom discussions. They have chanted slogans like "Break the Locks" and spray-painted graffiti on dormitory walls and grounds saying "I Am Out Tonight."

The students are demanding changes to what they call unreasonable curfew times and repeating an ongoing question in the public debate about women's safety in India - Is keeping women indoors after dark the only way to keep them safe?

"Why do I have to write the purpose on my forehead if I want to go out?" Paul asked, exasperated. "Why can't I just go out aimlessly and meet friends and stroll? Am I inside a cage?"

More than 1,800 incidents of rape were reported in New Delhi last year, and the city is being called India's "rape capital." But as women in India report increasing incidents of sexual assault, India's politicians, community leaders and even police officers have continued to blame women's clothing and behavior. Nationwide anti-rape protests in 2012, which were triggered after a young woman was fatally gang-raped in a moving bus in New Delhi, and other smaller, local campaigns across India have opposed such curbs on women's mobility.

"What we are seeing is the flowering of a new generation of women's movement in India," said Kavita Krishnan, a leading women's rights activist and a prominent leader in the anti-rape protests in 2012. "It is coming out of the tension created by the new economic climate where you want to send more and more women into higher education and workplaces but you want to control their behavior in the name of tradition."

In response to rising sexual assaults, a women-only culture has gained ground in India - with more women-only buses, cabs, travel groups and women's coaches on the Metro. But activists are also pushing back with popular campaigns like "Why Loiter," which urges women to wander without any apparent purpose and reclaim public spaces that are mostly inhabited by men.

The Delhi campus campaign has echoes of the global "take back the night" movement.

"The city will become safe not by having less women in public spaces after dark, but by having more women. When will they get it?" asked Utsa Sarmin, a 21-year-old political science graduate student.

As students marched past several dorms late one night this month, they carried one placard that said "Stop Treating Us Like Infants." They tore up and burned a dorm rule book and gate registers that record their in time and out time.

"If we ask to go out, they say, 'You are asking for too much freedom.' They threaten to call our parents to tell them, 'Your daughter is going astray, she wants to roam around at night,'" Paul said at one of the marches.

"Parents see these rules as critical to keeping their daughters safe in college, they would hold us responsible if something were to go wrong," said Pratibha Jolly, principal of a prestigious women's college in Delhi University called Miranda House, whose dorm has about 350 students. "If the students want more freedom, they need to negotiate it with their parents instead of us."

The Delhi University is a sprawling open campus and not walled or gated. "You can't just go about for a post-dinner stroll. There are areas which are not well-lit," Jolly added. "We are a women's college that gives wings to the students. We are not a prison."

The campaign against dorm rules began after one of the universities in the city, Jamia Millia Islamia, decided to cancel the two late nights that were allowed to the women in their dorm because of safety concerns. Student outrage followed immediately. What began as rants on social media quickly gathered steam.

Now student groups from other cities have also reached out to the protesters in New Delhi sharing stories about similar restrictions.

Last week, students at an Urdu language university in the southern city of Hyderabad protested successfully and managed to extend their curfew from 6:30 p.m. to 10 p.m.

Students say that in the past few years they have fought for more women's toilets, more vending machines for sanitary napkins and better street lighting on campus.

"Do not take our freedom away in the name of safety," said Avantika Tewari, a 21-year-old political science student. "Our 'Break The Cage' campaign is part of the ongoing safe-campus movement. At least give us access to libraries after dark. Why should the boys be the only ones using libraries till late?"

Students say that college dorms must extend the return times for female students to 30 minutes after the last Metro train pulls into the university station.

"I am new to this city and want to explore it," Paul said. "I want the return time to be extended to at least 11 p.m. And I want the taunting and the questioning to stop. I am an adult. I am old enough to vote."