The function began with President Ram Nath Kovind arriving at the venue in his ceremonial motorcade. 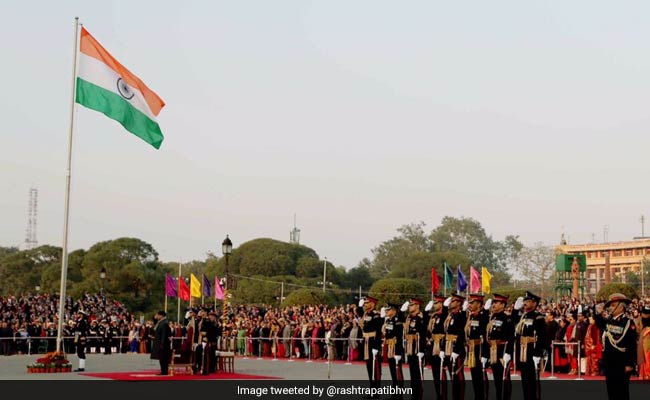 Indian tunes were the flavour of the Beating Retreat ceremony at Vijay Chowk on Tuesday with 26 performances by the bands of the armed forces and central and state police contingents which marked the culmination of the Republic Day celebrations.

The function began with President Ram Nath Kovind arriving at the venue in his ceremonial motorcade.

There were 25 tunes composed by Indian musicians, including ''Indian Soldiers'', ''Herana Heran'', ''Mushkoh Valley'', ''Tejas'', ''The Great Marshal'', ''Namaste India''. The only western tune played at the event was ''Abide with me''. The event will come to a close with the ever-popular tune ''Sare Jahan se Acha''.

This year, 18 military bands, 15 pipes and drums bands from regimental centres and battalions participated in the ceremony.

As the bugle was sounded for the retreat, the Raisina Hill complex lit up in a riot of colours, the illumination provided by LEDs rather than the traditional incandescent bulbs. Neighbouring buildings, like the Rail Bhawan and the Udyog Bhawan, however, had incandescent bulb lighting.

After the event, Prime Minister Modi ventured out into a stand, leaving behind his VVIP security cover, and shook hands with people.

The ceremony held on January 29 every year marks the culmination of the four-day-long Republic Day celebrations.

Beating Retreat marks a centuries old military tradition. At the sounding of retreat, the troops ceased fighting, sheathed their arms and withdrew from the battlefield, returning to their camps at sunset.