Around 80 fire engines were sent and firemen were at work all night to stop the blaze from spreading to neighbouring buildings, including a school. 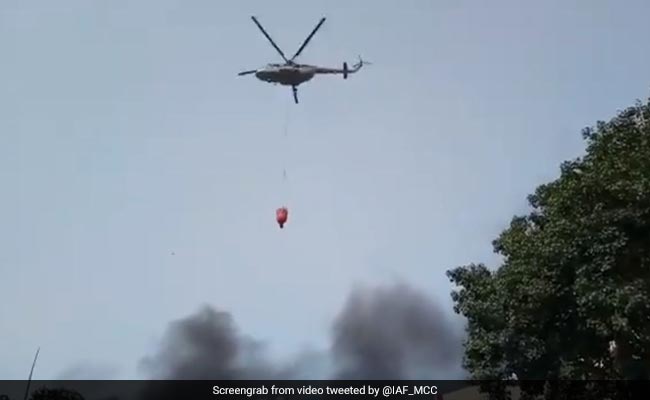 The Indian Air Force helicopter made several sorties to pour water to contain the fire.

New Delhi: Early this morning, an MLH class helicopter of the Indian Air Force flew over the national capital with bambi bucket to contain the fire that broke out yesterday in South Delhi's Malviya Nagar area. The fire, classified as the "highest category" blaze in Delhi in recent times, had started around 5 in the evening.

Around 80 fire engines were sent and firemen were at work all night to stop the blaze from spreading to neighbouring buildings, including a school. "Around midnight a request was received at HQ Western Air Command for containing a fire at Malviya Nagar in Delhi," the Indian Air Force said in statement. After the helicopter took stock of the situation, Bambi buckets filled with water from the Yamuna reservoir were dispatched.

Promoted
Listen to the latest songs, only on JioSaavn.com
The helicopter made several sorties to pour water to contain the fire which was visible from much of South Delhi. Approximately 8,000 litres of water was used in the operation.

"This was the first time the Bambi ops was done in an urban situation wherein the nitty gritties of drop are very precise owing to high rises around and chances of collateral damage," the statement added.

Delhi Police also arrested the owner of the illegal warehouse where the fire broke out yesterday. Sanjay Saini, owner of the rubber warehouse, did not have the necessary permissions from civic authorities and no fire safety equipment. The police believe a truck loaded with rubber material parked near the warehouse caught fire, which spread in no time because of strong winds last night.
Comments
Malviya Nagar Godown FireIndian Air ForceBambi Bucket